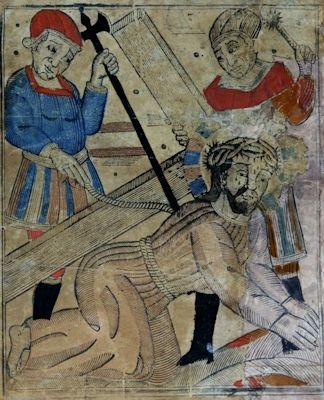 It is unsurprising that the places of worship, apart from attracting pilgrims, would also draw in sellers of devotional materials as well as their makers. Among the most popular effigies would be those which were connected to the site of the sanctuary. These would not only be a souvenir of the place which had been visited as a pilgrim, but also the belief that their provenance also made up for their religious value.

In Małopolska an important place of pilgrimage was Kalwaria Zebrzydowska, which was founded at the beginning of the 17th century by Mikołaj Zebrzydowski, who installed the Franciscan order (Bernardines) and built a monastery. He wanted to create the first Calvary in Poland which resembled the topography of Jerusalem. He hired Paul Baudarth for the job, and he designed a number of Stations of the Cross and supervised the entirety of the works. In 1617 all the Stations of the Cross were completed. The first divine service was held in Kalwaria as early as 1606, and it quickly transformed into a theatrical staging of Christ’s Passion. In the present day, the Passion play which is organised annually during Holy Week, still congregates thousands of the faithful who in turn follow every step taken by the biblical characters in the final days of Christ, played by both amateurs and clerics. The Autumn feast marking the Assumption of Mary is also popular among Marian pilgrims, who walk down the Calvary Pathways in contemplation of the most important events marking the life of the Mother of Christ.

Upon their arrival, pilgrims at Kalwaria Zebrzydowska would also venerate a number of holy objects found there: the miraculous image of Our Lady of Calvary, a silver figure of Our Lady of Angels and especially a figure of Christ at the Chapel of the Third Fall of Jesus Christ. The faithful would often buy mementos of their pilgrimages there; small sculptures and holy pictures made with various techniques, mostly depicting Christ falling under the weight of the cross. The copies of the images of Jesus, placed in wayside chapels, would show the way for pilgrims making the journey to Kalwaria Zebrzydowska.