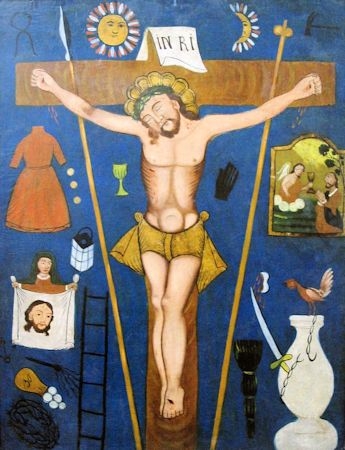 Popular in the Gothic period, the objects are depicted in illustrations of not only the death of Christ on the Cross, but also other Passion themes, such as the Christ of Sorrows (Vir Dolorum), although usually reduced in number to a handful.

Folk artists, especially in the 18th and 19th centuries keenly placed the Arma Christi in images portraying the various episodes of the Passion and death of Christ. The instruments of the Arma Christi would mostly come to the fore in effigies showing Christ on the Cross. Sometimes they would appear on the Cross instead of Jesus’ body. The Arma Christi would exercise the imagination, taking a strong hold over the thoughts of the Faithful through the symbolism of each item in the Passion’s cruel inventory and leading to contemplation of the ordeal suffered by the Redeemer.

The most common objects depicted which relate to the Passion were, apart from the Cross itself: the heart of Jesus, the Five Sacred Wounds (hands, feet, and side), the Crown of Thorns, the Holy Grail (a chalice symbolising spilt blood), a pouch containing silver coins (the betrayal of Judas), a pillar or column (the Flagellation of Christ), hammer and pincers (to drive the nails in and then pull them out of Christ’s hands and feet), the Holy Lance (used to wound Christ’s side), flagellum, nails, the Holy Sponge (of gall and vinegar, which was given to Christ on the Cross), the hand that slapped Jesus, a ladder (to take Christ down from the Cross), a skull (symbol of Golgotha and the first man – Adam), a titulus bearing the letters INRI, and the Veil of Veronica.

Prints with the effigy of Christ on the Cross with the signs of the Passion were often used as designs for pictures painted in folk workshops. The collection of the Seweryn Udziela Ethnographic Museum in Kraków holds a few examples of such images, mostly from the area of Małopolska.