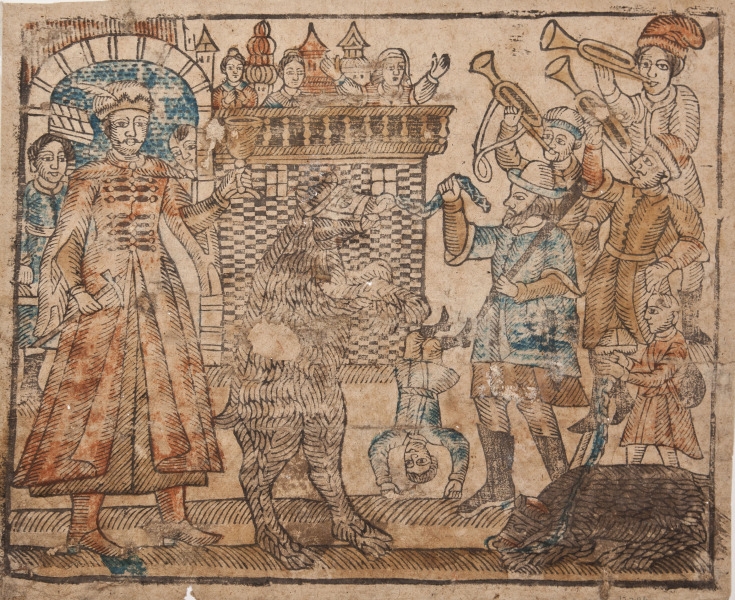 This print from the National Museum in Warsaw, showing a group of bear keepers, is the only woodcut of its type in the collections studied by the team of scholars at the Virtual Folk Woodcut Museum.

It is one of a small group of folk prints on secular themes; it is also unusual in being a multi-figural genre scene. Outside the walls of a non-specific town, a few itinerant jugglers with bears are showing off their circus tricks. One of the bears is standing erect on its hind legs; another is lying down obediently. Standing next to them are three buglers, and a clown dancing on his hands. These sideshow artists are being welcomed by a burgher raising his glass in a toast, and in the background by a larger audience in a gateway and on the top of a tower. One of the figures seems to be expressing delight, gesticulating wildly.

The figures depicted on the woodcut may be a group of gipsies, who used to train bears and earn their living as itinerant performers. Many gipsy families used to train animals – not only bears, but also dogs, monkeys and birds, as a craft passed down from father to son. There were even a few professional bear trainer schools dotted about the former Polish republic, one of them in Smorgonie in the Eastern Borderlands (today in Belarus). This school operated from the seventeenth century until the 1830s. The local townspeople are famed for the rather remarkable industry that is the breeding of young bears, teaching them tricks, and then touring nigh-on all of Europe with them […], wrote Zygmunt Gloger in his Encyclopedia of Old Poland. The founders of the “Smorgonie Academy”, as it was humorously known, were said to be the Radziwiłłs themselves. For many years it was run by the circus king Jan Marcinkiewicz, who had been designated for the post by Karol Radziwiłł. Performing bears entertained the unsophisticated commonality of the villages and small towns of the Polish Republic, but they were no less popular with residents of manors and palaces. And their skills were not restricted to dancing. They were also trained to play-fight with wrestlers, to guard residences, and to serve at table. Whole teams of obedient trained bears might also be seen pulling carts full of itinerant performing artists.

The woodcut itself comes from the collection of the writer Józef Ignacy Kraszewski (1812-1887). The author of Stara baśń (An Ancient Tale) travelled widely, and had an interest in the customs he encountered. He would record his impressions and observations, and these later enriched the plots of his novels. Perhaps in one of his many historical novels or short stories there is a description of bear keepers inspired by this woodcut, or even by such gipsy bear keepers themselves.