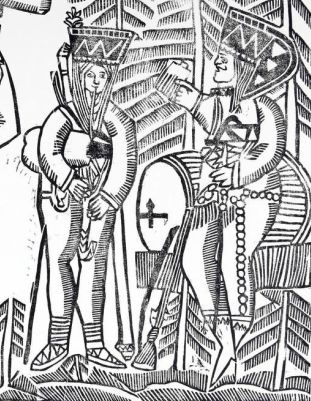 Around 100 years ago, when the popularity of the Polish highlands was at its highest, people would travel to Zakopane and other places in the Podhale region, observe the life of the locals and become enchanted with the local folk culture. It is certain that the instrument, which would be played from time to time by the Highlanders, would have also turned a few heads. On asking what the instrument was called, the answer would have been koza – bagpipes, yet misheard as kobza – actually a type of folk lute. Bagpipes have a long and interesting history. Brought from Asia to Europe in the Middle Ages, they became popular among soldiers knocking about the world, as well as among residents of manor houses who would make celebrations and festivities that much more pleasant. The bagpipes became especially popular among shepherds.

The bagpipes are not considered a complicated instrument – it comprises a leather bag and a few pipes. The pipe, which is held by both hands, plays the melody, while the other drone a constant low tones. The place, where the melody pipe is joined to the bag, is usually decorated in the form of a horned head. The bag, into which air is pumped through a special pipe, is made out of ram’s or goat’s skin, hence the Highlanders’ moniker for the instrument – koza.

Meanwhile, the kobza is a stringed instrument, reminiscent of a mandolin or lute. The kobza most probably comes from Greece, and was popular in Romania and Hungary. It was also used by folk singers in the Ukraine, where it was called a bandura and would be accompany Cossack bards. One can quickly deduce that the Highlanders, and especially a Tatra brigand, did not play the kobza…

The woodcut showing Janosik’s gang also holds a few interesting facts. Thanks to coincidence it was possible to use an old and worn 19th century print as a matrix and reconstruct the woodcut block. More on this can be read in the database, cf. 40747 MEK.