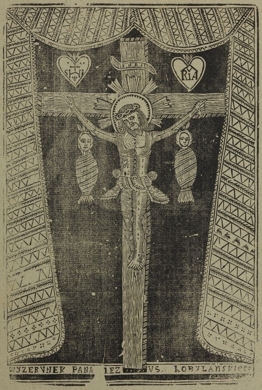 The original which formed the basis for these works, made by now-unknown artists, was a miraculous image with an interesting history, entwined with legend which came out of the story’s centuries-old provenance. In 1682, Jan Wielopolski received a picture from Pope Innocent XI depicting Christ on the Cross. After returning to Poland, he placed the picture in his estate’s chapel in Kobylanka. It soon transpired that it would not be the picture’s final destiny, however. People noticed a bright light above the chapel, a halo or flame… It was read as a sign that the painting had chosen another place for itself. The picture itself was taken to the parish church of St. John the Baptist in the same village, and then proudly placed on the main altar. Since that time, the picture gained the adoration of the people and was the source of many graces. Not only the faithful from across southern Poland would come to see the picture, but pilgrims also came from Slovakia and Hungary. Copies of the miraculous picture would be painted on canvas on printed on paper using woodcut blocks. They would be taken home and placed in the hearth as a memento of the pilgrimage. It was commonly assumed that the copy remained a miraculous picture in its own right, and which symbolically protected the home’s dwellers as well as the homestead. This tradition was called upon during the 300th anniversary of the shrine in 1982, when a copy of the Christ of Kobylanka went on a peregrination among the families of the parish.

The 19th century folk woodcuts depicting the image of Christ from Kobylanka are much smaller than the original; the size of the painting measures 188 x 12cm, while the woodcut block in the collection of the Stanisław Fischer Museum in Bochnia measures some 26.5 x 17.5cm (cf. inventory no. MB-E/653), while the block in the Ethnographic Museum in Kraków is just 15.5 x 9.8cm in dimension (cf. inventory no. 7810 MEK). The prints made from the blocks are a good example of the art of carving, thanks to which the etching and the black-white fields are simple but very decipherable methods of showing, on a plain background, a suffering Christ on the Cross, wearing a crown of thorns and with a wound on his right side surrounded by religious symbols. A decorative attribute comprises draperies placed on either side of the cross.