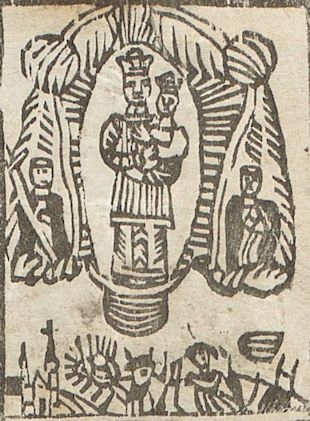 On the print we see the Madonna with Child, encircled by a drape and kneeling saints: Dominic and Hyacinth. At the bottom of the image we see a church, a man kneeling before a sort of shining object and a harnessed ox.

According to tradition, in 1516 a miraculous event occurred. The farmer Jan Czceczek was tilling his field and unexpectedly ploughed up a small bright figure of the Virgin Mary with Child. Being a simple man, he was not able to read the sign as coming directly from Heaven: he hid it at home, wanting to keep it only for himself. Soon after, Czeczek and his family became blind by way of punishment. Legend has it that the shining light coming out of the chest where the figure was kept was noticed by a devout woman, and the stone Madonna and Child was duly taken to a chapel. The water which was used to clean the figure was wiped over the afflicted eyes of the Czeczek family, only for them to regain their sight afterwards.

Over the years Gidel became famous as a place where God’s grace was present and the small village became a centre of pilgrimage. From the mid-17th century the carving has remained on the altar of a church especially erected as the seat of the sanctuary. Care for pilgrims was entrusted to the Dominicans, who were brought there. An important event took place there in 1923, when the miraculous figure of Our Lady of Gidle was adorned with golden Papal crowns.

The incredible occurrences of the appearance of the Madonna in Gidle all those centuries ago are recalled every year at a Holy Mass on the first Sunday of May. Pilgrims present at the Mass also receive the so-called “miraculous wine” of the Virgin Mary, blessed since the 17th century by dipping the figure in wine, which is thought to have healing qualities.