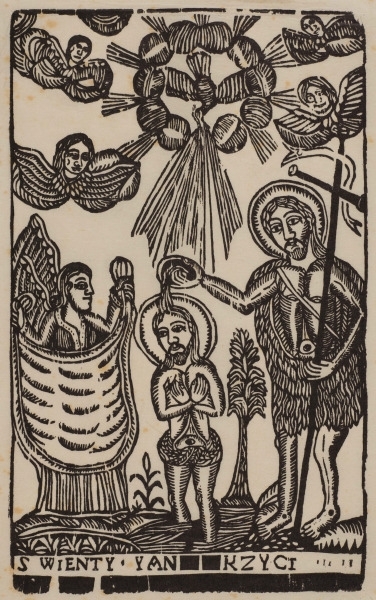 In the distant past, Epiphany water (trzejkrólowa woda) had many uses. It was, as they say in Beskid Śląski, “good for various needs” – it had the power to banish evil, prevent misfortune and grant prosperity. It is no wonder that the residents of the Beskid region carried it with them, just in case, and tried to ensure that the water came in contact with everything important to them. A draught of freshly blessed water was taken by members of the family, and later the water was sprinkled around the house and farm, both inside and outside. During this process the following was repeated three times: “Through this holy sprinkling, Lord, may You forgive my sins. And let the cursed spirit flee through the power of this holy water”. Epiphany water was also sprinkled on seeds during the sowing, potatoes, beans and other plants, and on cattle and the shepherd before the first pasturage of the year, as well as on the ploughman beginning his spring tilling of the soil. Water from the Epiphany was also used during bad weather. When a storm was approaching, people sprinkled the water around the farmyard while chanting “In the name of the Most Holy Trinity, in the name of the Father, the Son, and the Holy Spirit, storm, do not harm people nor the fields, nor our possession, nor our harvests”.

In the Eastern Church, the observance of the Baptism of Jesus Christ is combined with the celebration of Epiphany into a holiday called Jordan. This celebration is one of the largest most important in the Eastern rite. According to the Julian calendar it falls on January 6 (in “our” Gregorian calendar on January 19) and is considered a very festive occasion. A strict fast is observed on the day before Jordan, and in the evening a supper is held, similar to the supper on Christmas Eve.

In Orthodox churches, the Divine Liturgy of Saint Basil the Great is performed during Jordan. After its conclusion, the faithful solemnly proceed to a river, which symbolises the biblical Jordan, where the rite of “the consecration of water of the great Jordan” takes place. During the prayer, the priests bless the water by dipping a three-armed candlestick and a cross in the river, and later they sprinkle those gathered with the holy water. Participants in the ritual wash their faces with the water, drink it, wash any plates or utensils they brought with them, and take some of it home. This Jordan water is kept throughout the year and is used in domestic religious rituals or for medicinal purposes. In Polish Greek-Catholic and Orthodox parishes, the believers from other Christian churches have long participated in the ceremonies of the consecration of water.

In folk tradition, the Jordan celebration was accompanied by customs and magical practices that were supposed to bring health, happiness, domestic prosperity and to protect against evil. These rituals were, above all, connected with water. Below are the customs from the Hutsul region, an area located in the Ukrainian Eastern Carpathians inhabited by Ruthenian highlanders, whose distinguished culture has often enchanted researchers, artists and tourists.

While collecting the holy water, women also tried to collect small river stones which they later scattered around the fields where cabbage was to be planted. Because of this practice, the cabbage was supposed to grow well and be free of vermin. During the observance of Jordan, fishermen would dip their fishing net in the water and say: “I am catching fish”. This was supposed to guarantee them a good fishing season. Healthy, strong legs were assured by dipping them in the blessed water while saying: “As this water strongly flows, let my legs be equally strong throughout the year!” For those who wanted to prevent their feet from sweating, it was enough to step out of water and onto dry snow. Ablutions were also performed in holy water as it was believed that the water had a positive impact on health and beauty. During the ritual washing, girls would say: “Jordan water! You wash mountains and valleys, white roots, and yellow stones, wash away all our misfortune and blemishes and leave me as clean as the Virgin Mary!”.

After the celebrations, people would return home and sprinkle their households with Jordan water. The water’s power would be reinforced by the words spoken during the sprinkling: “Just as all that is evil flees from holy water, so let the evil flee my household, and don’t let the devil come near, and keep the storm, hail, and birds away, and prevent the witch from stealing milk”. The Hutsuls would add well or stream water to holy water and give it to livestock, as that was supposed to make the animals healthy and lively; they also sprinkled bees with the water as they believed by doing so the bees would remain in their beehives. The Hutsuls would also sprinkle orchards and gardens to protect the soil from hail and storms. The farmers were careful not to use all of the Jordan water at once, as one should keep a supply for the entire year. They would therefore pour it into a bottle, add a wax cross, and carefully seal it.
During the twelve days (two weeks) after the Jordan celebration, doing laundry in the river was forbidden, as it was believed that the water maintained its magical power for that period. If someone “insulted” the river by doing laundry, it could flood fields and houses or punish the insolent with a vermin plague.