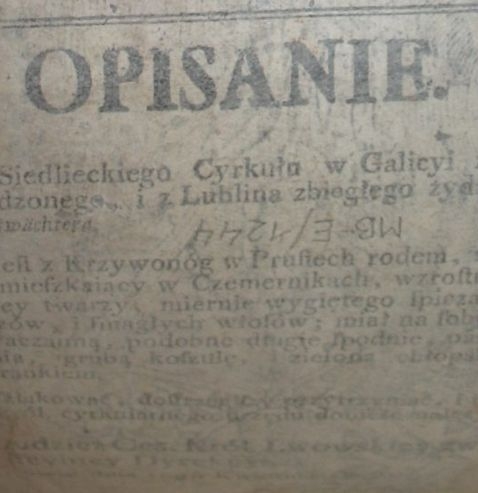 The blue-grey base demanded bright colours which would liven up the pale print made with paint which often would have been previously watered down to save on costs. As far as was possible, waste paper was used, such as old legal forms and documents – nowadays these papers are swallowed up by rubbish trucks or shredded in the office. The blank reverse side of a legal form was not to be dismissed. Today it is easy to date the woodcut prints precisely due to the fact that they were printed on such forms, and as such may give evidence as to their age.

The collection of the Stanisław Fischer Museum in Bochnia holds two antique items which are valuable to researchers not just because they were found ‘in the field’, but also present the qualities of the artists that made them. They are also interesting due to the prints being made on the back of old circular documents designated to be published in the Austrian partition and are written in German and Polish. The large headers split the reverse of both prints in two: Beschreibung, the masthead states, with a description found below it. They are nothing more than ‘Wanted’ notices issued in 1806 in Lwów (presently Lviv, Ukraine) by the Chief of Police Ignatz von Streicher. On the reverse of Our Lady of Prague (inv. MB-E/856) we find the description of a certain man, Ivan Chaika from the area surrounding Tarnopol, who had most probably escaped from arrest. According to the notice dated 15 April 1806, everyone was obliged to search for the man, arrest him, and take him to the nearest imperial office. The bad condition of the item makes it hard to read the description of the wanted man, but we do know that he was of medium height, had grey eyes, blond hair, had a beetroot red cape, and a navy blue shirt. Time has eaten away at a large part of the paper, making it impossible to read it completely.

The second item is in better condition, although here too some fragments are difficult to decipher. The woodcut print shows an effigy of Christ of Sorrows (inv. MB-E/1244). The print was found in the vicinity of Bochnia, made on the back of a ‘Wanted’ notice dating from 19 April 1806. This time the arrest warrant concerns a certain Schaie Israel Wächswächter, a 20-year-old Jewish hired worker living in Czermerniki and originally from the town of Krzywonóg (probably Krzywonoga) in Prussia, wanted for breaking out of prison in Lublin after being taken in for theft. Much like the other man, we read that he is of “average height”, has a pale face, “blue eyes and swarthy hair”, was wearing a jacket, long trousers, a pair of laced shoes, a thick shirt and a green peasant’s hat with a black lamb.

What happened to the fugitives, and did their crimes warrant the circulation of ‘Wanted’ notices? Did the long arm of the law finally catch up with them? These are just a couple of questions that anyone looking at these woodcut prints may additionally ask themselves.