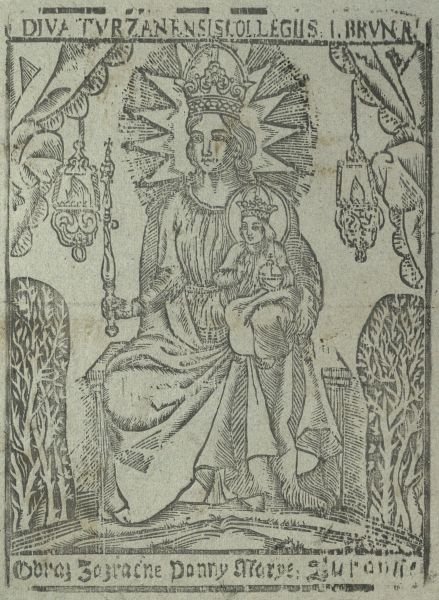 Many of them are immediately recognisable; others are forgotten and their iconography hard to identify. The collection includes images from various different parts of Poland, which was at the time divided under the partitions. One of these woodcuts is exceptional, however (see ECT.3042). It is an example of work by an unknown woodcut artist working far from centres of pilgrimage familiar to us today, and for different audiences. It might even be testimony to contacts within the Austrian Empire and previously existing states in Europe. It certainly speaks volumes about the role of woodcuts in propagating certain images and forms of devotion, at the very least through religious orders, which often commanded very wide spheres of influence. We do not know how it found its way into the collection, for it depicts Our Lady of Tuřany in Moravia. The Madonna is seated on a pedestal with the Infant Jesus on her left knee. In her right hand there is a sceptre, and her loose-flowing hair falls to her shoulders. Like Jesus, who is holding the royal orb in his left hand, she has a high imperial crown on her head. Above and beneath the Madonna are inscriptions, one in Latin, the other in Czech. The background features a heavy drape and burning lamps above two dense, thorny bushes.

The history of the many Marian sanctuaries in Poland abound with remarkable events. The story of the Tuřany Madonna with the Infant Jesus is equally remarkable, though it fits a familiar pattern. The Gothic sculpture from the Church of the Annunciation was made around the year 1300. Tradition, however, links it with the mission of the evangelists to the Slavs, Cyril and Methodius, who were to have arrived in this area with the figurine. When Greater Moravia ceased to exist, the sculpture was hidden in some woods, where it was found around 1050 in a thorny thicket by a peasant named Horak who lived in a nearby village. He was dazzled by its blinding radiance amid the wild rose bushes, and he took the figurine home, believing it would bring good fortune on his house. Before long, however, the Madonna miraculously returned to the place where he had found her. This recurred several times, and eventually, in accordance with the wish of Our Lady, a shrine was erected in the place where the sculpture had been found. Before long, Tuřany became a centre of the cult of Our Lady and a destination of pilgrimage; a church was built here in the twelfth century. The town’s heyday came in the seventeenth century. The extended church was destroyed by the Swedes when they attacked Moravia, and they used it as stabling for their horses. Throughout this period the statuette was kept hidden, but in 1649 it returned in triumphant procession. In 1658 a book by Fr Bohuslav Balbin was published extolling the Tuřany Madonna, Diva Turzanensis, which is also the inscription visible at the top of the woodcut. The book contained a copperplate etching showing a pilgrim church with a single spire surrounded by a ring of chapels, reached via a road lined on both sides by figurines, and an indication of the place in the woods on an adjacent hill where the Madonna was found.

During the Baroque period, the sanctuary, visited by pilgrims from Bohemia, Moravia and Hungary, was to play a significant role in the renewed spread of Catholicism. In the seventeenth century a congregation of Jesuits settled in Tuřany. They extended the sanctuary, and after their departure the diocesan priests were designated its custodians. At the end of the nineteenth century the church was extended again, to its present form, and in 1901 a new chapel was erected on the spot where Our Lady had revealed Herself in the thorns. The historical events are referenced in the inscription: “Here, to the Tuřans’ joy, the Mother of Love was found in 1050.”

Little remains of those woods today; Tuřany is a district of Brno known above all for its proximity to the local airport. In September 2009 during the visit of Pope Benedict XVI, Mass was celebrated on the airfield, and the figurine of Our Lady of Tuřany was brought from the nearby place of cult and placed on the pontifical altar.