STRONA GŁÓWNA / AWERS/REWERS / SAINT GEORGE – VANQUISHING THE DRAGON, AS HEARTY AS A HORSE 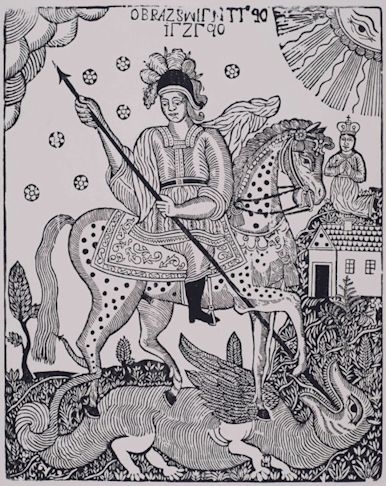 The hero of the painting, Saint George, of the Christian faith and a Roman soldier by profession, is at home in Cappadocia – he was born and raised here. Tradition and religion know of George primarily as a martyr from the times of the Emperor Diocletian (ca. 303-304), and the common imagination inspired by the legend see him as a knight and defeater of the dragon, an embodiment of Satan. The “Golden Legend”, a collection of hagiographies, states that the fight with the dragon took place in Libya in the town of Silene. The town’s residents, afflicted by the venomous breath of the beast, would feed it with animals, and when they ran out, people would be sacrificed. Saint George freed the people of Silene from the bloodthirsty monster and saved the king’s daughter from imminent death. The victory over the dragon, which Saint George undertook in the name of Christ, encouraged the people to convert to Christianity. And the king did do make a church there of our Lady and of St. George, in the which yet sourdeth a fountain of living water, which healeth sick people that drink thereof states the Golden Legend. The fearless knight – a vanquisher of the foul-breathing beast – became a patron of people afflicted with plague, leprosy, and fever, as well as those suffering bites from poisonous snakes.

The legend of the knight and dragon-slayer was extraordinarily developed in Catalonia. The struggle with the beast was to have taken place in Montblanc near Tarragona. Saint George killed the dragon, and a rose bush with red flowers rose from the monster’s blood. One of the flowers was given to the saved girl. Saint George’s Day in this region of Spain has become a feast for lovers, with the rose a gift and symbol of love.

Ethnographic studies list countless entries about this saint. On Saint George’s Day water would gain healing qualities. In some regions of Russia people would roll around in the morning dew, in while in other parts a night bath would be seen as remedial – for instance, in Lithuania horses wold be led down to the river so that they would be healthy and strong during the work that had to be done in the fields in the early Spring.

The victory of Saint George over the monster is also the subject of a folk song noted nearby Kielce:

In Kraków by the road,
Sits a dragon in his abode.
He had eaten everybody,
With only a maiden remaining.
Yet she rose in the morning,
To give God glory and praise.
Saint George came to her.
“Saint George go away from me
As the dragon will eat you and me”
Comes down the dragon from above,
Saint George reached his arrows
And fired them directly at the throat,
After which the dragon croaked.

It is clear from the text that the holy knight fought the dragon in Kraków. It seems that Saint George, who was the patron of one of the churches built on the Wawel Hill, was adept at hunting down dragons and killing them in various parts of the world.

Nowadays it is known from oral tradition that Saint George is patron of the ill, and it is of no surprise that he was chosen to be the patron of one of Poland’s oldest spa towns, Lądek Zdrój. The first thermal springs found here carry the name of Saint George and are housed in a building belonging to the “Old George” establishment. The water has outstanding medicinal qualities and has been used for hundreds of years. The oldest mentions of the valuable spring date from the 13th century, with a remedial centre based there since the 15th century. It seems that Saint George has not just been healing people in Lądek. Unused water from the springs would be piped through to a special pond which is used to bathe horses, who would be treated for “stiff thighs, swelling of fetlocks, lumps, cuts, and even equine eye disease.”

Depictions of Saint George’s battles with the dragon are found in the following woodcut prints in the database: see 46433/a MEK and 60015 MEK.