STRONA GŁÓWNA / AWERS/REWERS / SAINT STANISLAUS, THOU ART WITH GOD IN GLORY… WE SING IN THE OLDEST POLISH HYMN BOGURODZICA (MOTHER OF GOD) 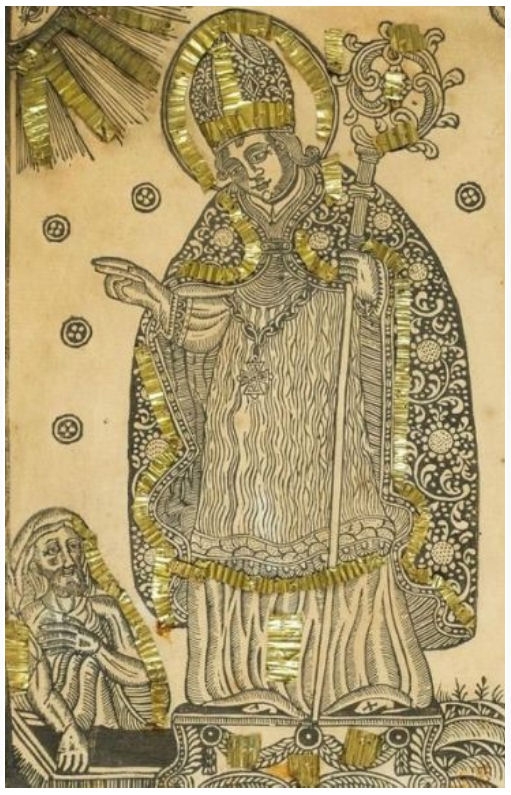 Truth and legend surrounding this figure have remained vibrant for centuries, particularly in Krakow, where, every May, a procession winds its way from Wawel Hill along the streets of the city to the nearby Skałka (the Rock). For it was there, on 8 May (or, according to other sources, 11 April) 1079, that Bishop Stanislaus was killed by the king’s men – or in other versions by King Boleslaus the Bold himself – as he celebrated Mass in the Church of St Michael. Every year, the procession, probably a relic of the post-canonisation celebrations, begins with Holy Mass in Wawel Cathedral. The faithful then process to Skałka, where they participate in another service, and thence return to Wawel Hill. On that day there are indulgences at Skałka, but, particularly in former times, this was not only an occasion for prayer, but a day of fun, purveyed by the many stalls, merry-go-rounds and other attractions. Devout pilgrims had the opportunity to see the tree stump on which, tradition has it, the bishop’s body was quartered, and also the pieces of the stone floor said to have been stained with his blood. The water at Skałka was said to have curative powers; people took it to treat problems with the eyes and skin. To this day outside the church is a small pond, with a Baroque statue of St Stanislaus, known as the Stoup of Poland, into which, legend has it, the bishop’s finger fell when his massacred remains were cast out of the church. In earlier time Stanislaus himself is said to have baptised local residents in the pond. Until recently visitors to Skałka would also throw coins into the water “for luck, for a husband, for a safe return”.

Another unique tradition connected with the saint was the expiatory processions of the Polish rulers to the site of his martyrdom, which were made by all of the country’s monarchs from Ladislaus the Elbow-High onward, with the exceptions of Stanislaus Leszczyński and Stanislaus Augustus Poniatowski. The latter, on the eve of his coronation, made a pilgrimage to the Church of the Holy Cross in Warsaw, where he prayed before an image of St Stanislaus, and only came to Skałka over a decade later. The custom was that each monarch, on the eve of his coronation (normally on a Saturday), processed, usually on foot, to Skałka, accompanied by the pealing of all Krakow’s bells, after which he would return to Wawel Cathedral for vespers. The reliquary housing the head of St Stanislaus would be carried before the king, who would later be blessed with it by the celebrant bishop. The Polish kings made this pilgrimage to Skałka to venerate the patron saint of their country, recall his martyrdom, and ask for his blessing and protection. The procession was treated as a form of exoneration for the monarch’s own individual sins and expiation for the murder of Bishop Stanislaus by Boleslaus the Bold.

The first extant mention of Stanislaus is found in the chronicle of Gallus Anonymus. His description was drawn on by Wincenty Kadłubek, and subsequently also by Wincenty of Kielcza, who used this source as a foundation which he supplemented and augmented with elements including the well-known legend of the raising of Piotr of Piotrawin from the dead (see link to a rare folk woodcut: inv. no. 7815 MEK). Others who wrote hagiographies of St Stanislaus were Jan Długosz and Piotr Skarga. Later scholars seeking the roots of the dispute between the bishop and the king often arrived at conflicting conclusions. St Stanislaus was said to have interceded for church faithful persecuted by the monarch, or to have indicted publicly the king’s immoral lifestyle. Another source of conflict may have been disagreements surrounding the actions of Pope Gregory VII affecting areas such as the role of secular and spiritual power, an issue that was dividing Europe in his time. Indeed, a person’s stance on the “St Stanislaus affair” was an indication of his political alignment and world view.

But let us return to Krakow, to Skałka. It was there, probably ca 1150, that the bishop’s body was initially laid to rest. Before long, however, “on a divine admonition”, it was removed to Wawel. One hagiographer wrote: “Men and women would flock to his grave out of devoutness; they would embrace the grave and touch it with their lips, or take a little soil or a stone from it, and a touch of this sort healed many bodily sicknesses and dispelled numerous troubles of the soul. While his saintly body remained in the Church of St Michael, he also used to reveal himself frequently to such devout people, and offer them teaching on many matters of salvation or of comfort to their hearts, and, removed to the cathedral, he did the same. (…) Finally, to this day countless sick people, in particular those with throat [problems] and swelling, and not only Christians (…) touched with his bishop’s ring or with water in which the ring has been immersed, have their longed-for health restored.” His place of rest in Wawel Cathedral – the Confessio of St Stanislaus – rapidly became an important place. It acquired the name “Ara Patriae” – the altar of the fatherland. The saint’s protection was sought in troubled moments of historic significance for the nation. Among the victories attributed by their contemporaries to his intercession were the Battle of Płowce in 1331 and the Battle of Grunwald in 1410. From the 14th century onward, trophies of war were laid at the tomb of the patron saint of Poland. The cult of St Stanislaus was one of the factors that contributed to the reuniting of the duchies into a single realm at the time of the country’s division into provinces in the 12th century. Likewise, after the partitions of Poland at the end of the 18th century, the legend of the re-fusion of the martyr’s quartered body served as a symbol offering hope of a rebirth of the Polish State. It was often only standing before the “altar of the fatherland” that pilgrims visiting Krakow from the other partitions gained a full realisation of the links between their regional and familial traditions with the history and culture of Poland. It was here that the national consciousness was moulded.