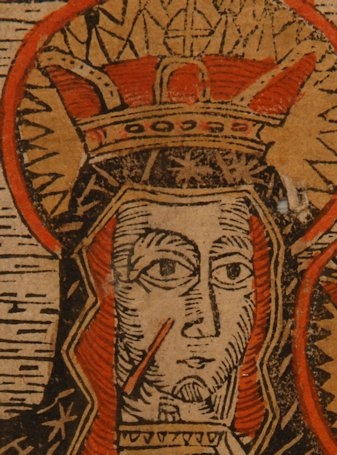 For centuries the feast has been celebrated in a special way in Jasna Góra, in the most important Marian sanctuary. In the days running up to the holy day, numerous pilgrimages from around Poland begin to arrive there. Every pilgrim wants to stand before the face of Our Lady of Częstochowa, known thanks to abundant reproductions and copies, often part of distant cults which revere the icon with their own names. Some of the pilgrims know the history of this incredible image of Our Lady. Legend intertwines with reality in social conscience, however. Research into the image and its history have brought new facts to light, which do not lessen the deference for this work of art, identified with the characters it depicts, and written in the annals of the nation’s history and the hearts of the people. In 1655 Augustyn Kordecki, the prior of the Pauline monastery at Jasna Góra, expressed these feelings during the Swedish deluge: “Let us hold the conviction that the independence of the Kingdom of Poland, the public and private possessions of the Republic, the churches, give praise to God and to past liberties through the intercession of Our Lady of Jasna Góra so that they may return and that we can proclaim that the Virgin Mother of God is the shield of the Polish Kingdom.”

The painful grimace on the face of Our Lady of Jasna Góra is underlined by the traces of cuts on the cheek of the Virgin Mary. Not many people know the history of these cuts, and that there are many similar traces of cuts on the image which come from various sources. Old woodcut prints show the characteristic scars on the face of Mary, but also an earlier trace caused by the piercing of the picture by an arrow. This mark is visible on the neck in a print in the collection of the Museum of Folk Construction in Sanok (inventory no. 5477 MBL) and in the Ethnographic Musuem in Kraków (inventory no. 55039 MEK), among others.

The original – as legend has it – is one of the seventy icons painted by Saint Luke the Evangelist, and is said to have been painted on the boards of the table once used by the Holy Family. The legend goes onto tell of the icon’s concealment, and then its donation in 326 to Empress Helena, who came to Jerusalem to search for the relics of the Holy Cross. The picture thus found its way to Constantinople, and in the 12th century was taken to the Rus. It was placed by Lev Danylovych of Galicia in a castle in Belz, where it became renowned for its many miracles. In 1372 the Duchy of Belz came under the Polish Crown, and was governed by the Hungarian, Vladislaus II of Opole. It is said that the Tatars sieged the castle – the icon was hung from the castle walls to strengthen the defences, and was pierced by a Tatar arrow. The fog which followed shortly after dispersed the enemy, and Vladislaus dreamt of an order to take the miraculous image to Jasna Góra. This became reality in 1382. Another version of the legend suggests that he wanted to transport the icon to Opole, but on the way, near Częstochowa, the horses refused to continue, and the icon stayed in the place that they chose. Tales also speak of attacks by the Hussites, who not only raided the monastery and robbed it a dozen-or-so years later, but also wounded the face of Mary. Chronicler Jan Długosz writes of another fact in 1430, when the sanctuary was raided by criminals who not only daringly robbed the artefacts and church decorations, but also broke the picture and struck it with a sword. This damage, attributed to the Hussites, was the reason behind which the picture was given up for conservation works between 1430-1434. Research from 1984 shows that the picture was repainted twice and is made up of three layers: the iconic layer from the 12-13th centuries, an Italian layer from the 14th century, and the aforementioned conservation layer of the 15th century.

Dramatic history has meant that the image of Jasna Góra bears the marks of twice-inflicted damage. So, the neck of Our Lady carried a mark of an arrow, which according to old accounts Vladislaus ordered to be “joined and pressed together with gold plates and precious stones”. The hole was in all probability made larger when the valuables were taken out during conservation in the 15th century. During this time the “scars” on the face were carved and highlighted using a red pigment. The memory of the arrow slowly disappeared, but the mark remained in older copies of the miraculous image. Around 25 scratches and cuts also remained on the oldest layer of the icon, a testimony to its tempestuous history.

The “scars” on the face and neck of Our Lady of Jasna Góra are an integral part of the icon’s identification. Even though they are in part covered by decorative veils, they play an important role in the social conscience, joining in the fight against suffering, two important determinants of Polish history. They were and still remain an inspiration, a motive for religious and national elation, a source of reflection and emotion.