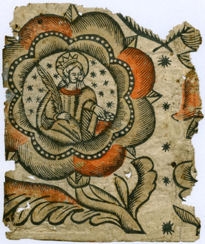 They became known in Poland from the Renaissance period, first arriving in manor houses. With time, however, they also became common in city dwellers’ homes, and later on also in peasants’ huts, where they would be prominently displayed in the hearth of the home, often by devotional pictures. Folk coltrina were made with woodcutting techniques and were made by the same artists who made devotional woodcut images.

An example of this can be found in a woodblock in the MEK collection; a double-sided 19th century woodcutter’s block from Płazów, with one side used to decorate the coltrina with a bouquet of flowers, while the other side has a devotional image of Saints Barbara and Catherine. It is likely that the block is the last remaining of its kind in Poland.

During research undertaken in 2011, two coltrina fragments were found in the Historical Museum in Sanok, showing the effigies of as yet unidentified saints on a background of a stylised flower. It is possible that these two coltrina may have been made from one woodcut block and may comprise a whole. Meanwhile, at the Tytus Chałubiński Tatra Museum in Zakopane two interesting coltrina specimens can be found with floral decoration, originally from the chapel in Zaskale erected in 1842, which was then dismantled in 1918. The items were found during further dismantling works in 1931 by a writer of the “Gazeta Podhalańska” local newspaper, and future director of the Tatra Museum, Juliusz Zborowski.

Unfortunately paper versions of the coltrina are very rare. The reason for this is the way in which they were used, which was ultimately detrimental to their safekeeping – they were stuck directly onto walls, and would be susceptible to humidity and dirt. After becoming damaged beyond repair they would be replaced by new ones.