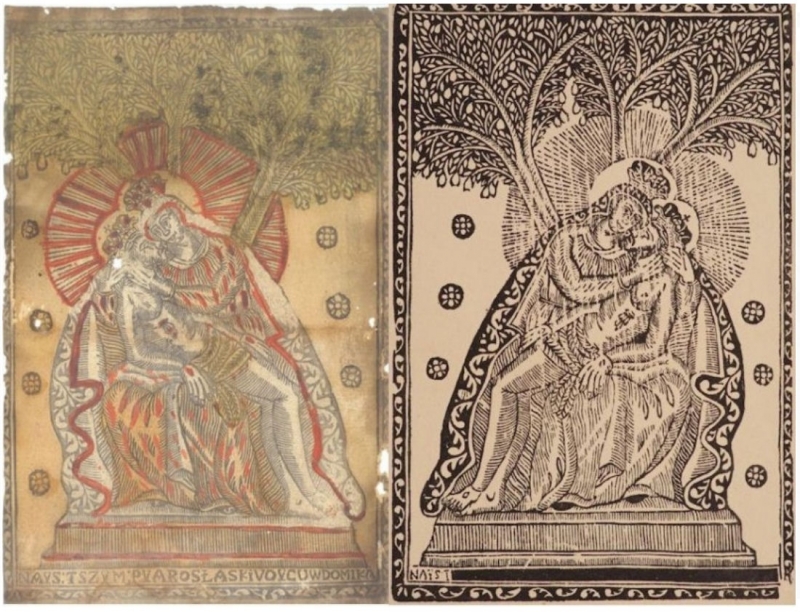 The unfinished inscription along the bottom edge and the mirror-image composition in relation to the Jarosław original has long invited questions as to the reason for these “flaws” in the woodcut.

By happy chance, the woodcut recently revealed part of its secret. In 2012, during field research in Ukraine, we came across an almost identical print, probably dating from the beginning of the 19th century, and now held in a private Rural Museum founded by Mikhail Balanovich and his brother, in the village of Dyadkovychi near Rivne in Ukraine. This old, hand-coloured print, on handmade paper, has been preserved in relatively good condition. It differs from the image impressed from the Płazów block in only a few details, including the arrangement of the composition… and the completed (though clumsy) inscription. This invites the supposition that one of the prints made from the same block as the impression found in Ukraine was later used to make the Płazów block! The woodcarver who sculpted it probably copied the image onto the wood from the existing print. Testimony to this version of events is the mirror-image effect (the misarrangement of the figures in the Płazów version in relation to the original in the Jarosław Sanctuary and to the print from which it was copied), and the unfinished identical fragment of the inscription. The similar dimensions of the two prints also contribute to reinforcing this assumption.

Who made the older block, and where was it made? Has it survived? Are there other prints made from it? These and many other questions remain, alas, unanswered.

See the following woodcuts in the database:

print in the private collection of Mikhail Balanovich

print in the Mazowieckie Museum in Płock MMP/E/5824