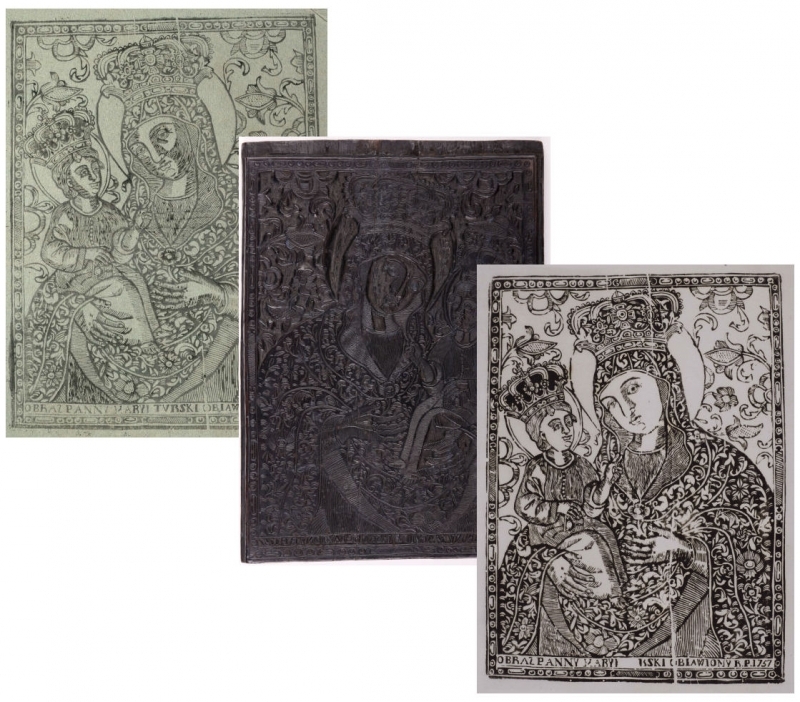 In the collections of the Ethnographic Museum in Krakow there is a two-sided board for making prints of a unique image known as Conscription by Christ, and on the reverse an image of Our Lady and Child, see 36418 MEK. The original matrix was purchased in 1972 from the Krakow artist Jerzy Panek (1918-2001). This outstanding contemporary painter and printmaker had a special relationship with the woodcut art. He created a style of his own that was characterised by a certain rigour, economy, and arbitrary approach to the mark as representation, which was recognised at the 4th International Art Biennial in Krakow in 1972 and reflected in the prizes he garnered at many other exhibitions. In its conciseness of draughtsmanship his art was close to the form of the folk woodcut. It was therefore natural that he should become involved with the work of the Ethnographic Museum in Krakow, and in 1970 he made a series of prints from early blocks collected for an exhibition of folk printmaking that was being prepared at the time. One reminder of this period is a contemporary film in which the artist, still a relatively young man, demonstrates the intricacies of woodcut art. We do not know how Panek came into possession of this block.

The image of Our Lady with the Child on the reverse (see 36663 MEK) is framed by a delicate plant ornament. She is holding her Son on her right arm, and the overall image is reminiscent of many Hodegetria-type Marian images of cult, though this one is in mirror image, and less hieratic in appearance. The most noteworthy feature of this block is the incomplete inscription at the bottom: OBRAZ PANNY MARYI …RSKI OBIAWIONY R.P.1757 [AN IMAGE OF OUR LADY OF … REVEALED IN A.D. 1757], as the part of her name referencing the place where the image functioned has been removed. All searches using the date as reference were also fruitless, which led to the hypothesis that perhaps it referred not to the year of the revelation but to the date of execution of the block.

In 2013 the previous history of the block was unexpectedly revealed. Scholars examining the collection of folk woodcuts amassed by Józef Gwalbert Pawlikowski (1793-1852) noticed a print, presumably executed some time between 1801 and 1841, evidently from the same block (see: ECT.3043). In the more than century since that print was made, the appearance of the block changed considerably, as evidenced by the successive prints. The print now held in Lviv displays the inscription without the interference visible on those contemporary to us. The author had offered the following full information in his inscription: OBRAZ PANNY MARYI TVRSKI OBIAWIONY R.P.1757 [AN IMAGE OF OUR LADY OF TURSKO REVEALED IN A.D. 1757]. He had also attempted to lend the faces of Mary and her Son the illusion of three-dimensionality by employing dense hachuring, which in combination with the slapdash impression lent the faces their characteristic blackening. Later on, most likely for aesthetic reasons, this hachuring was removed, rendering the faces of the figures lighter in appearance. Even more curious conclusions are invited by the alteration to the inscription. The block was probably made by someone who had never seen the original, following the wrong design. The image from Tursko, in Greater Poland, is one of the better-known Marian images of cult, hence the presumably considerable long-term demand for copies of it. It combines features of a woodcut depicting Our Lady and the Child in full, modelled on a well-known sculpture from Mariazell, and the figure of St Michael the Archangel and SS Catherine and Barbara. In the Baroque era, many autonomous reproductions of the image of Our Lady of Tursko were disseminated, intended for the pilgrims that came to the sanctuary in great number. News of the miracles seen there doubtless spread, causing demand for images from Tursko in regions far distant. And until those who acquired them realised that their image was not an accurate reproduction of the original, no-one was any the wiser. With the dissemination in the nineteenth century of printed devotional materials, however, the inaccuracy would have been discovered, and an anonymous corrector made the necessary alterations to this rather “incompetent” work. Now, any name desired could be added to the prints by hand.
This is mere conjecture, however. We do not know what further research will reveal. Perhaps one day we will discover more about the history of this block and interim versions of prints made from it….