STRONA GŁÓWNA / AWERS/REWERS / THE TIARA AND THE CROWN 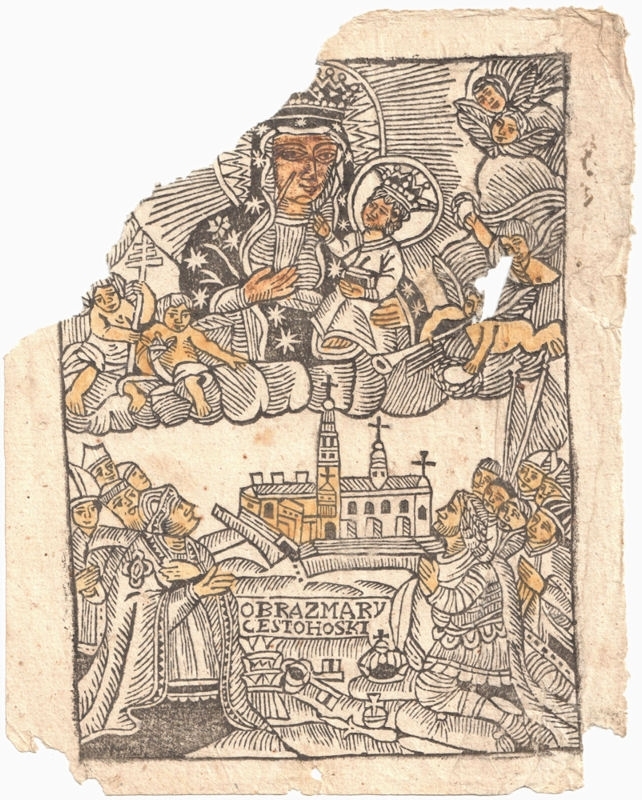 The inspiration for the woodcut most likely were drawings printed in a Pauline printing house established in 1693 in Częstochowa. Thanks to Antoni Agapit Nowakowski, a monk, engraver and woodcutter who ran the printing house from 1717 to 1729, the Częstochowa printers acquired a copperplate signed by Bartłomiej Strachowski of Wrocław (?–1759). It depicted the Black Madonna of Częstochowa amongst clouds and surrounded by Saint Luke and Saint Paul of Thebes. The monastery at Jasna Góra, over which an eagle spreads its wings, can be seen in the lower half of the composition, as well as the Pope surrounded by the faithful and the king with his entourage, all worshipping the miraculous vision in the heavens. A copy is preserved today in the collections of the Seminary in Warsaw.

Perhaps the drawing refers to the events that took place in 1717. The most important of these events was the coronation of the icon of the Black Madonna with crowns bestowed by Pope Clements XI. That year August II the Strong offered a crown adorned with diamonds as a gift for the treaty with Tarnogród Confederation. In doing so, he became yet another monarch who gave his regalia to Black Madonna of Częstochowa (Sigismund II August and Władysław IV had previously done this, among others).

The picture by Bartłomiej Strachowski must have enjoyed great popularity among pilgrims, as very soon Nowakowski made a copy based on it. Impressions made from the original (or from the monk’s replica) might have become the model for the woodcutter who preserved its similar size. He simplified the image itself, however, by removing the figures of the saints and the eagle. Unfortunately, we do not know this author, who – as most woodcutters – did not include his monogram on the picture.

The preserved impression was modestly coloured with orange paint, which in the eyes of regular buyers must have increased its value. Perhaps it functioned as a souvenir of the pilgrimage to the Jasna Góra Monastery – it was particularly precious as it came from a “holy place”.


The woodcut is located in the WMDL database, see Bibliotheca Hagedorneum