STRONA GŁÓWNA / AWERS/REWERS / THE TOMB OF THE LORD JESUS 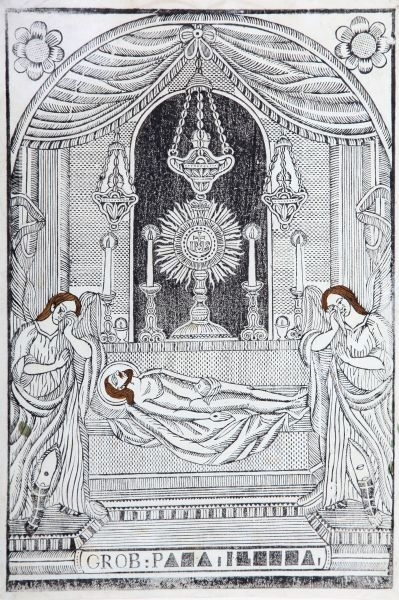 We will see this scene depicted in a woodcut shortly. Every year, after the Good Friday liturgy is concluded in all churches, the Holy Tombs are opened. This tradition has its roots in the Middle Ages, and in the Baroque period gained additional embellishments. In the 18th century the tradition of decorating the Tomb and erecting the monstrance beside it disappeared in almost all of Europe; the tradition was preserved only in Austria, Bavaria, Hungary and Poland, where it flourished and can still be seen today. The main characteristic of “Polish” Tombs is that their decorations reference current historical circumstances. Particularly visible were those displayed in the most difficult moments of the Polish nation – during the Partitions, World War II, under martial law. Visiting Holy Tombs in churches, commonly known as “walking the tombs”, is part of Polish Easter traditions.

After the Good Friday service, the commemoration of the graves begins the third hour after noon. Only in Poland can you find such magnificent, opulent rituals. Long ago, the monasteries competed with one another in the ornamentation of these tombs, hoping to draw the most faithful to their churches. Near the tomb, located at a distance behind the bushes, scenes of the Passion of the Christ, or natural phenomena, were displayed. Armed guards watched over the Holy Body, before which angels kneeled, filling the air with scents from thuribles. Colored lamps shone, illuminating the shimmering streams of fountains, luminous globes revolved; amongst the trees one could see the eclipsed sun and moon. Windows covered with black kapas did not allow the rays of the white day to enter, the weak light of the temple spread from the tomb, unable to fight the dark. By the tomb, the silhouettes of praying people were distinctly visible. Their whispers and sighs filled the space, while mournful singing and dolorous music would at times come from the choir and from behind the tomb. Upon seeing this scene, a man would experience a sense of insignificance and humbleness; his heart overflowed with longing and a secret fear that God had died – and the world stopped on its axis awaiting His resurrection. And indeed, everything else was arrested in that moment, including the Church: the pulse of everyday life stopped, secular matters vanished, the nation – in its mind and heart – travelled back to a time when the biggest sacrifice in the name of humanity took place. Yet there were no laws prescribing this observance; it emerged from custom, from the religious spirit of the people, Oskar Kolberg wrote in his volume “The Krakovian”.

The chronicles mention that the most beautiful and ornate tombs were created in churches in Warsaw and Kraków. Yet Łukasz Gołębiowski writes: Village tombs were of similar quality as the ones in cities; the most important thing was to make them splendid and magnificent; here, in the midst of the sea waves, a terrifying whale would swallow and spit out Jonah; the miraculous fishing of St. Peter would be shown in another place, or some other religious theme. A small garden in front of the tomb was decorated with ripe oat, cress, and box, while empty space was covered with colourful sand; there were lemon and orange trees on the sides as well as flowers and lamps with colourful lampshades.

Jesus Christ’s tomb, as presented on the woodcut 60014 MEK, is rather modest. There are no lemon trees around Christ’s dead body, no circling globes, no fountains with silver waters. Instead, the beauty of the place is created by expertly chosen ornamentation. The guards watching over the holy body are unarmed. The tomb is watched not by knights, soldiers or firefighters, but by despairing angels.
On Sunday morning, the angels’ cries will be transformed into a joyous singing over the empty tomb.