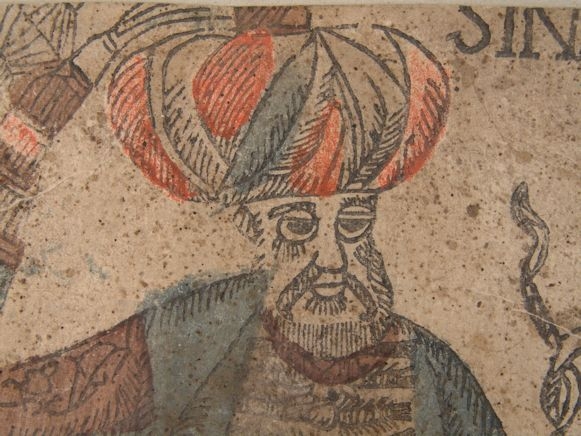 The parchment used to bind this book was not fused with the cardboard, which enabled the conservators to see that the binding was made from many layers of printed sheets of paper glued together. After the sheets of paper were carefully peeled apart and cleaned, they transpired to be pieces of kołtryna (It. – coltrina – curtain, Lat. cultra – covering, counterpane) – paper wall hangings that were very popular in Poland from the sixteenth to the eighteenth centuries. These hangings were made using woodcut blocks, printed at first onto canvas or damask, and later onto cheaper material – paper.2 They were often coloured, and depicted motifs of plants, geometric ornamentation, or figural scenes. The prototype of modern-day wallpaper, the kołtryna was a common feature of the interior decor of noble manor houses and country churches.3 As such, they were stripped during renovation or redecoration work, which is why no early examples have survived in situ on walls.4 The main context in which pieces of kołtryna might survive was as scrap paper used in book bindings; one example of such a discovery in the binding of an old manuscript was cited in 1922 by Marceli Nałęcz-Dobrowolski.5

The use of scrap paper in bindings was necessary for reasons of economy; because paper was expensive, unnecessary or outdated printed matter was used in place of cardboard: “The book, read, often hungrily, as soon as it was released, once interest in it had waned, often became scrap paper and thereafter had to serve secondary purposes. Even today the custom of selling old books to vendors as wrapping for cheese or herrings is familiar; in previous ages it was normally used to face the inside covers of new books.”6

Twenty-nine of the more than fifty pieces of wall hangings of various size found in the book binding bear ornamental motifs printed in black paint onto thick paper [fig. 2, 3, 4]. The wall hanging in its entirety was composed of smaller pieces of paper glued together at the ends [fig. 4, 5] to make the full “drop”. Only once the drop had been prepared in this manner was the pattern printed onto it. On the reverse of one of the sheets there is a woodcut print depicting Our Lady in a mandorla [fig. 12]. The iconography of the other pieces is intriguing: they show two high-ranking Turkish officials on horseback, with the inscriptions SINAN BASZA [photos 6, 7, 8] and BASZA BUDA [fig. 9] at the top. One of these figures was presumably Grand Vizier Koca Sinan Pasha (1512-1596), a commander of the Ottoman forces during the Long War against the Habsburgs (1591-1606), or his successor, Cigalazade Yusuf Sinan Pasha (1545-1605).7

The woodcuts are coloured in the standard manner, with brown, red and blue. They are highly detailed, and the warriors’ attire is richly ornamented. One of the figures is shown in profile, the other en face, and they have differing attire. In the lower part of the prints there is an upland landscape with buildings visible in the distance. Prior to their reuse as binding scrap, the drops featuring the Turks had been used as wall hangings, which is attested by the numerous fly-spot marks [fig. 8] and even a feather still stuck on [fig. 10]. It is not known where this copy of Bordoni’s Works was bound. On the front free endpaper there is an owner’s inscription from the Library of the Pauline Monastery in Pińczów [fig. 11]; perhaps it was there, in the Pińczów bindery, that the prints were stuck onto the binding.