STRONA GŁÓWNA / AWERS/REWERS / WHAT CAN WE FIND IN OLD MANUSCRIPTS? 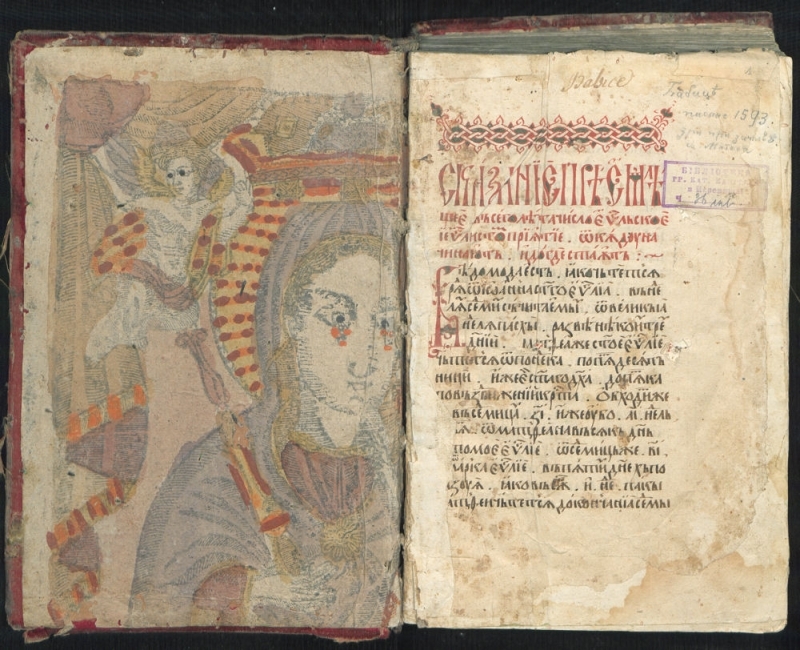 There are around a thousand Eastern Christian liturgical manuscripts in Cyrillic preserved in Polish libraries. The most important collection is housed in the National Library in Warsaw. Many of these books come from the former collection of the Library of the Greek Catholic Chapter in Przemyśl, as they were moved in 1946 as a result of national politics as well as pressure from both the Soviet government and from the Orthodox Church. The Przemyśl Library had mainly collected important Uniate texts from formerly Polish lands. The collection’s origin was its cathedral collections from the 18th century. Generous donors, like Fr. Canon Jan Lawrowski (1773-1846), enlarged the book collection. Apart from books, they bought manuscripts, coins and medals, and prints. The library was supposed to present the achievements of both Catholic rites, and the importance of this task only increased with the Austro-Hungarian empire’s patronage. The collections steadily grew, and this process took on new dimensions at the turn of the 20th century. Cultural artefacts at risk were saved. Many of these objects were donated by rural parish priests who realised the value of the old and unused books found in the recesses of Orthodox churches.

To present unique woodcuts in the WMDL, we often have to use complicated means to find them. Thanks to POLONA, a modern portal that grants access to the National Library’s collections and those of other institutions, as well as our inquiries into literature on the subject, we can better understand these woodcuts that served as the endpapers of liturgical books used in the distant past by Greek Catholic churches. Two examples of such woodcuts came from the collections of the former Library of the Greek Catholic Chapter in Przemyśl.

The first example is the Gospels (National Library, Manuscript 11835 III), donated in 1590 by the burgher Jan Chomicz of Babice, of the local Orthodox church of the Nativity of the Pruchnicki deanery, of the Przemyśl diocese. For years the book was used in Babice in the wooden church of the Dormition of the Mother of God. The wooden cover and velvet binding is dated around 1600. However, it was probably repaired in subsequent years and it covers what is most interesting to us – two fragments of a woodcut featuring a Marian theme (Rps 11835/III). A similar woodcut, made of two parts, was preserved in full, although it is not as old, in the collection of the Pawlikowskis. It is now located at the Wasyl Stefanyk National Science Library, also home to parts of the prewar Ossolineum collection (inventory number: 69735). In the case of the Babice Gospels, we are most likely dealing with impressions of an earlier version of the woodblock depicting the same image. The woodcuts are painted with different colours, including yellow, cinnabar, pale brown, ashen-purple and dark red. The endpaper of the front cover is made of a rectangular fragment of the woodcut, and on its upper left corner there is a partly preserved image of the Mother of God crying bloody tears and holding a mace. In the corner, there is a banner under which an angel points at the Mother’s crown. The endpaper of the back cover depicts a rectangular fragment of the bottom right section of the same woodcut. In the upper section, we can see the bare feet of the baby Jesus, and a little lower a piece of a scapular and a panel with scenes depicting miracles performed by Mary, mother of Jesus. Along the right edge, a holy monk stands with an open book. At the bottom, there is an inscription – barely readable in the manuscript – referencing July 1, 1691, when in the Kamieniec Podolski Castle Mary shed bloody tears in nondescript circumstances.

We know that in 1672, when the Turks conquered the Kamieniec Podolski Castle, the Franciscan Church was turned into a stable. The inscription, however, refers to the temple of the Carmelites. Is this a woodcutter’s mistake or does the lower part of the woodcut belong to another piece of art? Or is it a part of an image with which we are not familiar? According to available sources, the painting with Mary and the Child was thrown into the Smotrycz river. After many “adventures”, the painting found its way to Kalwaria Pacławska, where it remained despite many attempts to recover the work. The painting became famous due to the many miracles which it allegedly performed. It was crowned in 1882.

Another woodcut comes from the Irmologion, dated to 1667 (National Library, manuscript 12067 I). The Irmologion is a liturgical book with texts meant to be chanted during liturgical services. The example in question, created by the copyist Aleksander Fedinowicz from Nowosiółki (Lesko deanery), is decorated with ink drawings and miniatures. The endpaper of the front cover is a 19th-century woodcut depicting Saint Joseph with the Child. In his right hand, Joseph holds a flowering rod, while Jesus affectionately plays with his beard. Both figures are portrayed against a dark backdrop with white speckles. A simple set of colours was used during the colouring process – grey and two shades of cinnabar. Along the bottom edge there is an inscription in Polish, ending with the letter K, a likely reference to the name of the image’s author. On St. Joseph’s robe there is a handwritten inscription from 1907 (?) stating the donor’s name: priest Antoni Ławrowski (born in 1844) from Odrzechowa in the Sanok deanery (Rps 12067/I).