STRONA GŁÓWNA / AWERS/REWERS / WHAT GAMES DO OUR CHILDREN PLAY? 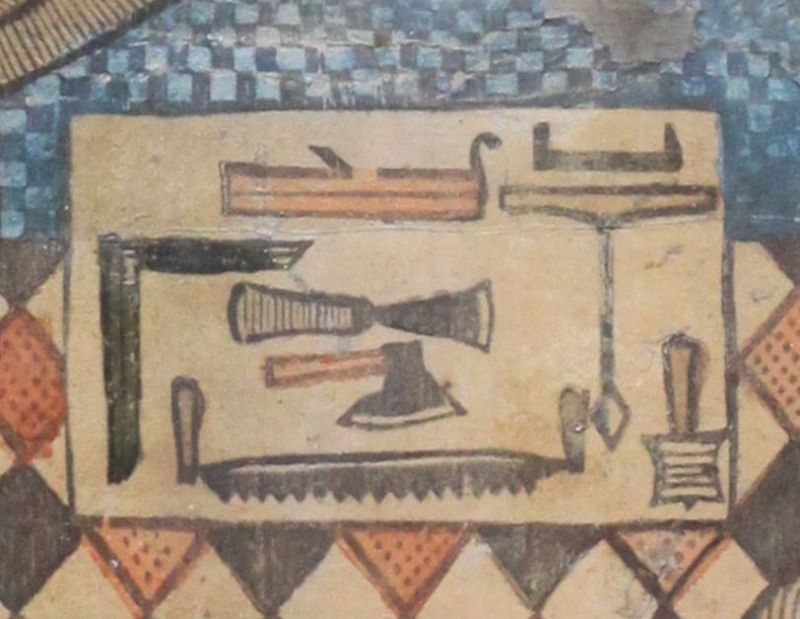 St Justin, a Christian apologist living in the second century, reports that Jesus’ earthly guardian made agricultural tools and farming equipment, specialising in the manufacture of yokes and wooden ploughs.

This exquisite woodcut from the Płock Diocesan Museum depicts a bearded man against a decorative background, with a smiling child in his arms (see database MDPŁ/189). The haloes, the crown on the child’s head, and the lily in the man’s hand indicate that this is St Joseph with the Baby Jesus. Just in case of any doubts as to the identity of the figures, however, at the bottom of the woodcut is the clearly visible inscription: OBRAZ [image] S.JOZEFAE, and at the saint’s feet, in a rectangular box, is a set of woodworking tools. It is remarkably complete, comprising a two-handed saw, a plane, a chisel, a drawknife, a try-square, an axe, a hand drill, and a reel of twine. Was the creator of this block a carpenter or joiner himself and thus familiar with the tools from personal experience? Was giving the saint so many attributes a way of adding his own signature? By adding to the woodcut representations of these tools, so important to any craftsman working in wood, was he hoping to pay a special homage to the patron saint of his own trade? Looking at this impression, made from a tastefully carved block, we can probably answer all the above questions in the affirmative.

The toolbox is disproportionately small. This should not come as a surprise, given that the author of the block was particularly concerned with exposing the human figures, and reducing the implements to the role of symbol. And though I know this, that rectangular toolbox holds something else for me.

Children love to copy what adults do. They watch them and imitate them, and this is their natural way of learning. They play house, play at being fire-fighters, doctors, librarians. What games might the young Jesus have played? He is sure to have played in his father’s workshop at being a carpenter. When I first saw this woodcut in the WMDL database, I imagined that the miniature tools depicted on it were a set of toy tools for the boy Jesus. I imagined St Joseph in his spare time, with the patience and attentiveness that were typical of him, making a “carpenter’s set” for his son. I imagined his pleasure at the boy being able to saw small pieces of wood, plane them smooth, check right angles with his try-square and make holes in them with his drill… I imagined Jesus’ joy at having his very own toolbox with real tools. And then the question popped into my head: what games do our children play?