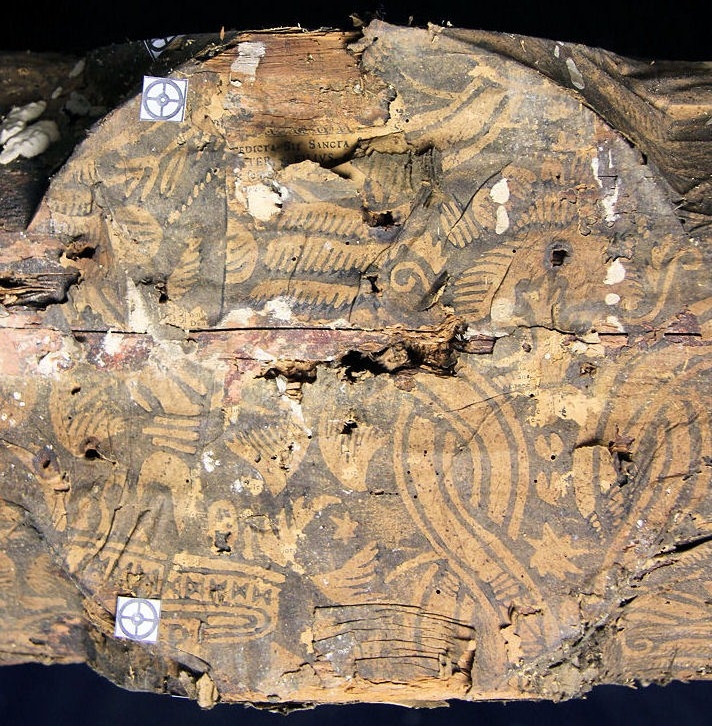 Two wall beams have retained about 10% of the hangings and three middle ones are 90% covered with them. After being taken down, the beams were moved to the Dominican priory in Krakow. By decision of the Conservation Committee, restoration work on one of them began in 2014 and will continue until 2015.

The preserved woodcuts were printed on linen paper. In all there are 51 hangings in very poor condition: they have numerous defects, tears and discolourations and the paper is very weak. The ornamentation is dominated by braided motifs, complemented by a crown with the initials S.P. In the course of the works, fragments of paint were found on the beams under the hangings indicating that they must have been covered with polychromy once. Unfortunately, nothing which would allow to date the hangings has been preserved. Similar ceiling decorations were discovered in other Krakow houses and date back to the seventeenth and eighteenth centuries. An example are hangings from the house at ulica Floriańska 25 – now the seat of the Museum of Pharmacy (17th c.), or planks and beam hangings in the so-called Senators’ Room of Pilichowicz House at ulica Gołębia 16 (see woodcuts in the database: 71707 MEK, 71708 MEK, 71709 MEK). The latter may be precisely dated thanks to fragments of a 1748 calendar, the pages of which were recycled for the woodcut prints.

We hope that the restoration work will serve not only to preserve these very rare historical examples of hangings but also provide new information about them.