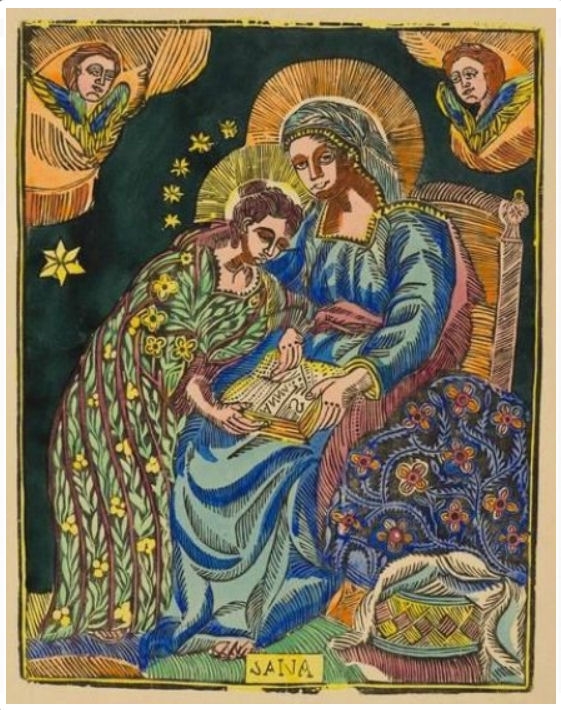 Saint Anne was the wife of St Joachim, mother of Mary, and grandmother of Jesus. The only information we have about her comes from early Christian apocryphal writings. The “Proto-Gospel of James”, written ca. AD 150, states that Anne was of the line of David and lived in Bethlehem. She had received a careful, proper upbringing from her devout, virtuous parents, before marrying Joachim, a wealthy youth from Nazareth. The marriage was exemplary, and the spouses devout and generous. All they lacked for complete happiness was offspring; childlessness in Jewish culture was considered a divine punishment. For many years they prayed for a child, and bore their misfortune and the humiliation they suffered at the hands of others with patience. God heard their pleas, and an angel told St Anne and her husband that in spite of their advanced age they were to become parents. In gratitude for the gift of offspring, the parents offered their only daughter up to God, and gave her over to serve in the temple in Jerusalem. After the death of her husband, St Anne went to be with her daughter and her family in Nazareth, where she lived to a great age.

The cult of St Anne emerged in around the fourth century AD and spread apace with the growing veneration of the Blessed Virgin Mary. In the East her saint’s day has been celebrated since the eighth century AD. The oldest known images of St Anne also date from this time.

Iconography: St Anne is usually depicted with her daughter, teaching her to read, or as St Anne with the Virgin and Child. Her attributes are a finger on her lips (which represents humility and quietness), a book, and a lily.

26 July is also the day on which St Joachim is remembered.