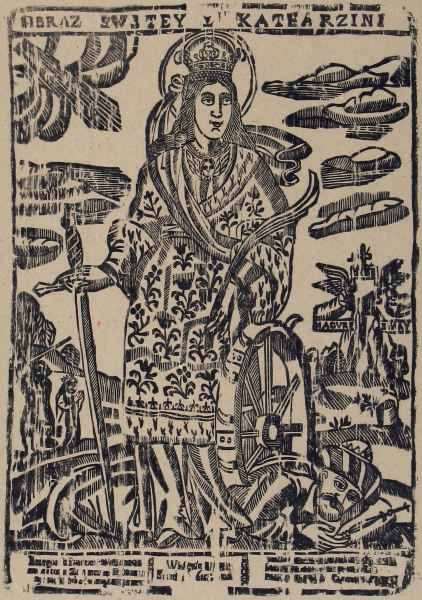 According to tradition, Saint Catherine, virgin and martyr, came from Alexandria in Egypt. She was descended from a royal line, was young, and famed for her beauty and wisdom. She defended her faith boldly in an age of persecution of Christians. One surviving legend speaks of a dispute she conducted with some philosophers charged with persuading her to abandon her faith in Christ; divine inspiration and her own great wisdom enabled her to convert the scholars themselves to Christianity. Catherine was condemned to cruel tortures – she was flogged with ox veins, starved, and broken on the wheel – but in spite of her suffering she refused to pay tribute to the pagan gods. She died at the sword. Legend has it that her body was carried by angels from Alexandria to Mount Sinai and her relics were deposited in the monastery at the foot of the mountain.

St Catherine’s Eve was once a time of matrimonial fortune-telling for young men. St Catherine herself was held to be the patron saint of virtuous bachelors, whom she was said to assist in their quest for a good bride. St Catherine’s Eve fortune-telling customs were similar to those for St Andrew’s Eve. Among the most popular were drawing lots bearing the names of girls, which the young man would then place under his pillow that night. The name on the paper was to be the name his future wife would bear. Fortune-telling in matters of the heart and of matrimony was not as popular among young men as the equivalent St Andrew’s Eve customs among girls, and the tradition died out altogether at the end of the nineteenth century.

Catherine – girl’s name, from the Greek katharós: pure, without blemish

Iconography: St Catherine is depicted as a young woman in a royal crown, with the palm of martyrdom in her hand. Her attributes are an angel, the Infant Jesus, the wheel on which she was broken, a cross, a book, a sword, a bolt of lightning, and the figure of her persecutor.