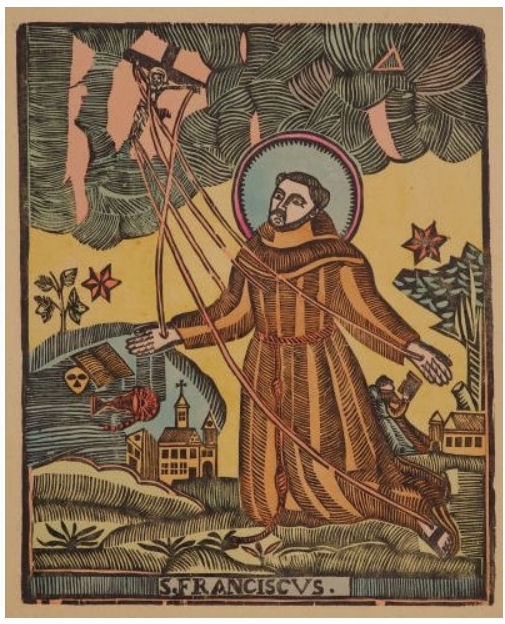 Saint Franciszek (Jan Bernardone) was the first stigmatic, the founder of the Franciscan orders, and a reformer of the Church. He was born in Assisi (1181 or 1182) into a wealthy merchant family. The years of his youth were a carefree time, taken up with recreation and dreams of the honours of the chivalric estate, to which he aspired with the help of his father’s money. But the war in which he fought radically changed his life and plans. Rather than embarking on the career path of a knight, Francis underwent a spiritual transformation, and God evidently began to work in his life, calling on him to mend the Church. At first the saint understood this call literally, and set about rebuilding a ruined church outside Assisi, but before long it became clear to him that what God had charged him with was a mission to renew the institution of the Church, which at that time was racked by disputes and heresies. The only way of doing this was to return to the virtues underscored in the Gospels – love of one’s neighbour, poverty, penitence, courage, simplicity and serenity. These were the values and behaviours that Francis and his companions preached to the people as they wandered from town to town. Francis’ work bore fruit in the creation of the Order of the Friars Minor, the Order of the Poor Ladies (with St Clare) and the Secular Franciscan Order. St Francis died on 3 October 1226 in Assisi. He was canonised just two years after his death.

St Francis was known for his love for the poor, the sick and the needy, and for all works of divine creation – the elements, plants and animals. His first biography, written in 1229, contains a description of his sermon to the birds, who listened to his words in great concentration.

Iconography: St Francis is depicted in a habit, sometimes with stigmata, often surrounded by birds. His other attributes are a crucifix, a book, a lamb, and a fish.

According to tradition it was St Francis who initiated the tradition of Christmas nativity scenes. On Christmas Night, in order to pray and rejoice at the coming of the Saviour, he set up a manger, representing the stable in Bethlehem, in a woodland glade. This custom spread first to Franciscan churches but later became more widespread and has survived to this day.
On St Francis’ Day some churches offer blessings for pets.