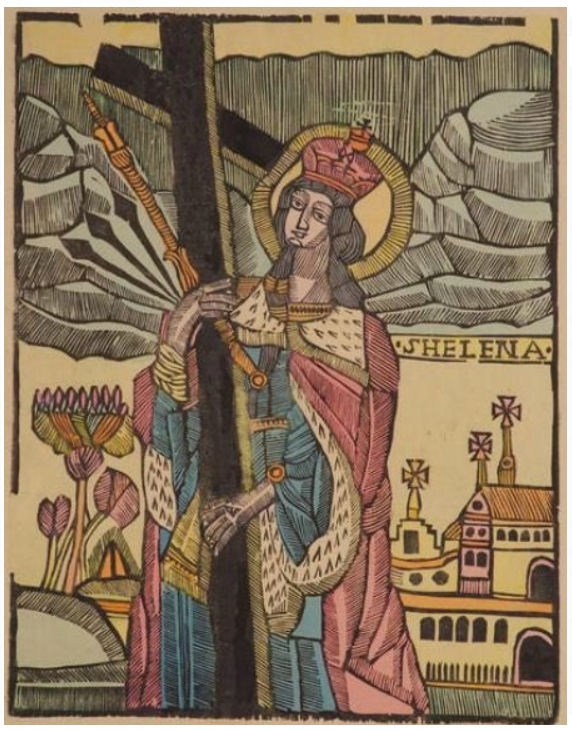 Saint Helen bore the Latin name Flavia Iulia Helena and was the dowager empress of the Roman Empire, mother of Constantine I, the Great. She was probably born in Drepanum (later Helenopolis) in Asia Minor, ca. AD 250. Her parents ran an inn in which, tradition has it, the young Helen met the Roman officer Constantius Chlorus. She settled in Naissus (Niš), in present-day Serbia, as his concubine, and there, in AD 272, she had her son Constantine. Constantius Chlorus was an outstanding leader and an efficient administrator of the lands under his control. In recognition of his services, the Emperor Diocletian appointed Constantius to help him govern the empire, but Helen and her son were removed from contact with him. After the death of Constantius, whom the sources describe as a good and mild ruler, the legions appointed his first-born son, Constantine, emperor. The new emperor at once summoned his mother, and from then on ruled jointly with her. As the years went by, Constantine, with the support of his mother and the many Christians devoted to him – and, according to legend, inspired by God – overcame all his enemies, ultimately rising to become the ruler of the entire empire. As an act of gratitude to the Christians, in 313 he pronounced an edict awarding them complete freedom of cult.

Saint Helen received baptism sometime between 311 and 315, and from then on she devoted herself to charitable work – giving alms to the poor, freeing prisoners, and helping exiles return to their homeland. Tradition credits St Helen with the finding of the Holy Cross. On a pilgrimage to the Holy Land, the empress, with the assistance of the bishop of Jerusalem, Macarius, succeeded in having the altars of Jupiter and Venera that stood on Golgotha removed. Excavation work brought to the surface three crosses, and one of them, which had the power of healing the sick, was taken to be the Cross of Christ. St Helen was the founder of some magnificent churches: in Jerusalem, on Golgotha, she had the Basilica of the Holy Cross and the Church of the Resurrection erected, on the Mount of Olives the Church of the Ascension, and in Bethlehem the Basilica of the Nativity. She died in Nicomedia ca. 330. Her cult began to spread from the moment of her death.

Helen – a name derived from the Greek hele – gleam – or helane – torch.

Iconography: St Helen is usually depicted in an imperial cloak and crown and with a large cross on her shoulder. Her other attributes are a small cross in her hand, three crosses, a cross and three nails, and a miniature church.

St Helen is depicted on the woodcut: MMP/E/5820