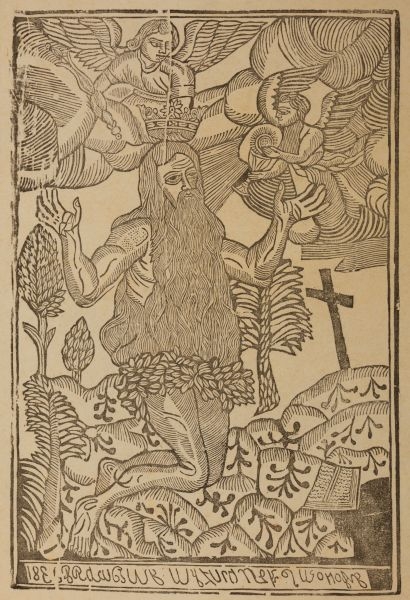 Saint Onuphrius lived in the 4th century. According to tradition, he was the son of a Persian or Egyptian ruler, but he eschewed the courtly life as a youth and went to live in a monastery in Hermopolis. After that he lived as a hermit in the Thebaid desert region, where he spent 60 years in prayer and penance. We owe what we know of him to Saint Paphnutius, who encountered Onuphrius as he was seeking a place in the desert for his own cell. According to St Paphnutius’ account, the saintly old man was covered in nothing but his own long hair and beard, and his only sustenance was the meagre desert vegetation, and bread and water that was brought to him every day for thirty years by an angel. Legend has it that in a later period God had a date palm grow up by his cell, with twelve branches, each one of which fruited in successive months of the year, and beneath the tree a spring of healthy water began to flow. The angel also brought Onuphrius the Blessed Sacrament. When Onuphrius died, Paphnutius buried him in a grave dug by two lions. The cult of St Onuphrius spread rapidly in the East, where he is venerated greatly to this day.

The saying At Saint Onuphrius, open all your coffers up, recorded by Samuel Adalberg in his book of proverbs (Księga przysłów, 1894), is one of many now forgotten maxims who meaning has today become obscured. Perhaps it reminds us that June is warm and it is time to bring out all the summer clothes that had been packed away. Or maybe it is a reference to the fact that in former times it was not until June, when the muddy highways had dried out, that journeys were planned, and trunks and cases brought out and packed for the road. Its true meaning remains a conundrum to us – if anyone knows an explanation for it, please write to us at: drzeworyty@etnomuzeum.eu.

Iconography: the saint is depicted as an old man with long hair and a beard covering his otherwise naked body. He is accompanied by an angel with a chalice and the Host. Other attributes include a skull, a date palm, two lions digging a hole, a cave, a crown and sceptre, a cross, and a staff.

The Eastern Orthodox monastery of St Onuphrius in Jabłeczna on the river Bug is one of the most important centres of Orthodoxy in Poland. The feast of the indulgence on the saint’s day draws thousands of believers to this charmingly situated sanctuary.