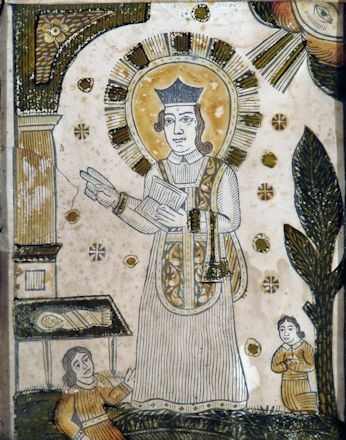 Little is known about him. The earliest documented reference to remembrance of his martyrdom on 14 February dates from the 7th century. The later Roman Martyrologies state that he was a priest who performed many healing miracles and paid for his faith in Christ with his life – he was decapitated under Emperor Claudius Gothicus in Rome ca 269. The cult of St Valentine, priest, healer and martyr, spread rapidly and by the Middle Ages had engulfed most of Europe. He was venerated as the patron saint of those suffering from cholera, gout, nervous and mental disorders, and above all epilepsy, which was known in some regions as “St Valentine’s sickness”.

St Valentine’s Day in Poland was celebrated with votive rituals. In the Kurpie region as recently as the early 20th century, people would bring votive offerings made of wax on behalf of those who suffered from headaches, nervous disorders, paralysis, mental illness or epilepsy, as well as frail and nervous children. They would circle the altar three times with their offerings, gather the dust that had collected in the various nooks and crannies in the church, and rub it on the afflicted parts of the sufferer’s body as they prayed for them. In the Pomerania region, votive candles the height of the epilepsy sufferer would be made, and left as offerings in the church on 14 February. In Krompachy in the Spisz region worshippers to this day process round the altar with wax candles to receive an indulgence on St Valentine’s Day.

Nowadays St Valentine is known above all as the patron saint of lovers, and 14 February as Valentine’s Day. This tradition in Anglo-Saxon countries has a pedigree going back hundreds of years, with young people singling out their sweethearts and sending them tokens. The origin of this custom is not known, though it may be connected to the belief that 14 February was the start of the mating season among birds in the British Isles. In literature, Valentine’s Day customs are mentioned in Geoffrey Chaucer’s Canterbury Tales (14th c.) and in Shakespeare’s Hamlet. Another essential Valentine’s Day token are cards, sent to each other by lovers. This custom was first noted in England at the turn of the 17th and 18th centuries. Today it would be hard to imagine Valentine’s Day without the ubiquitous red love-hearts.

Iconography: the saint is depicted as a bishop or priest, with a chalice, a sword, and the palm of martyrdom, amid the sick (for the woodcut in our database see: MHS/S/1882)

There are relics of St Valentine in St Mary’s Church in Krakow.