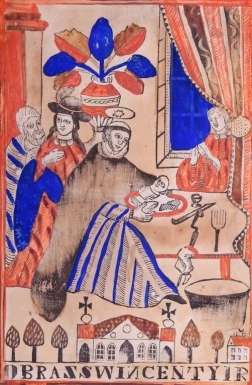 Vincent Ferrer (ca 1350-1419) was a Spanish Dominican friar and preacher. He lived in times of severe trial for the Church, which was in the throes of the Western Schism. Vincent’s loyalties lay with the anti-popes. He was even the confessor of Benedict XIII, but when he realised that a return to the unity of the papacy was essential for the good of the Church, he tried to persuade him to abdicate.

For many years of his monastic life Ferrer taught philosophy and theology, and later exercised a number of both church and state functions. According to legend, he received his vocation to preach the Gospel in miraculous form. During a serious illness he saw a vision of Jesus, who healed him and ordered him to go out into the world and preach the Word to various nations. From then on, St Vincent devoted himself to itinerant preaching. Over the twenty years of his peripatetic mission, he taught in countries including Spain, France and Italy. He exhorted his listeners to convert and do penance before the imminent Last Judgment. He was a charismatic preacher whose fiery sermons attracted crowds of people and elicited vibrant reactions. He could move his audiences to tears, remorse and action. He had the gifts of tongues and divining the future, and the power to perform miracles – he raised the dead, multiplied bread and healed the sick. He was canonised in 1458, thirty-nine years after his death.

Vincent, boy’s name from the Latin vincere – to be victorious.

Iconography: usually depicted in the Dominican habit surrounded by listeners, the sick and the infidel. His attributes are wings, a trumpet, a flame, and a book.