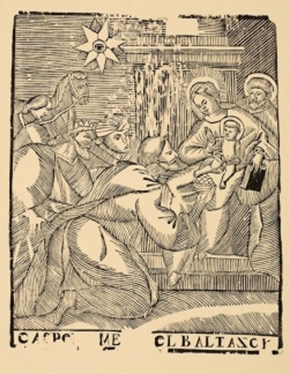 The Magi from the East came to Bethlehem to pay homage to the Baby Jesus and give him gifts: incense as a symbol of divinity, gold representing power, and myrrh as a sign of martyrdom. Yet the Gospel of Matthew makes no mention either of their number, or of their names, or even of where they came from, guided by the light of the miraculous star. Tradition has it that they were three; in the 6th century these Magi became known as kings, and in the 8th century names emerged: Caspar, Melchior and Balthazar. According to legend, on their return home they were baptised and died a martyr’s death in defence of their faith in Christ. One legend gives their burial place as Jerusalem, whence their remains are said to have been transferred to Milan. From Italy, the relics of the Three Kings were relocated in 1164 to Cologne, which thereupon became a major centre of Christian pilgrimage. Today, the relics of the Magi from the East are preserved in Cologne cathedral in a reliquary considered the greatest masterpiece of medieval goldsmithery.

From the theological perspective, the story of the arrival of the Magi in Bethlehem describes the revelation of God to all the nations in Jesus Christ. The celebration of the Epiphany is one of the oldest holidays in the Church. It was celebrated in the West as early as in the 4th century.

The feast of the Epiphany (or Twelfth Night, as it is known in English) brings to a close the Christmas period (the twelve days of Christmas). In Polish tradition there are several customs connected with this day, which was known as “generous”. Carollers would visit homes singing carols and bringing good wishes. In return for their wassail they would be regaled with specially baked pastries called “szczodraki” (from “szczodry” – generous). In the north-east of Poland children would be given animal-shaped pastries. In Małopolska water was blessed for use in rites intended as protection against magic, storms and all other misfortunes. Chalk, myrrh (resin) and incense were also blessed, and the myrrh and incense then burned in the home to assure the family health for the year. This was also the day when the family jewellery, and gold and silver coins were blessed. Today at the Epiphany, chalk is blessed and then used to chalk the sign of blessing above the front door: the letters K+M+B. These are commonly thought to represent the initials of the Three Kings, although the official elaboration is Christus Multorum Benefactor (Christ benefactor of many) or Christus Mansionem Benedicat (May Christ bless this place).

Melchior – Hebrew name. Melek or means “God is my light”.