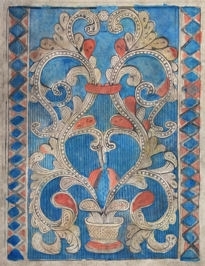 The name is also used to describe the prints made thanks to this method. Their execution would be carried out by using wooden templates – blocks which would be carved into a defined pattern. Covered in paint, and then pressed against paper, the block would allow for the copying of a picture many times over. Depending on the method of preparation, the block could be made of wood cut along the grain, or against it, and which would produce woodcuts or engravings respectively. Wood taken from apple, pear, cherry, linden, alder, and beech trees would usually be used for making the block, and it was not uncommon for both sides of a plank or board to be used. The largest prints would sometimes be made out of a few woodblocks. Sometimes boards would contain a number of images, which would then produce a sheet with various pictures ready to be cut to size. The prints could then be coloured by hand or with the use of a template and watercolour, distemper, or tempera paints. To begin with, paints with small amounts of colour would be applied to the block in thin layers. Later woodcuts would be decorated by applying bright coloured paint in a thick covering layer. Folk woodcuts were distinguishable by their surfaces, a strong contour line, often enriched with hatch-like lines for mostly decorative purposes. The compositions would have inscriptions which show that their authors, much like the people that would then see the finished works, were often illiterate or had little knowledge of the art of writing. Few artists left their mark in the form of initials on the blocks; we know only of a handful of names of woodcutters, such as Maciej Kostrzycki from Płazów, Tomasz Bąkowski and Ksawery Stankiewicz from Leżajsk, or Wojciech Bryndza and Sagan from Bobrek.


In Poland woodcutting became popular towards the turn of the 15th and 16th centuries. Sources from this time relate to illustrated prayers to Our Lady of Częstochowa which would be sold among the townsmen, as well as other woodcut images distributed at markets, fairs, and church indulgences. It is most probable that thanks to this, woodcuts, which were hitherto used to decorate renaissance books or popular linen sheets hung up on walls, known as coltrina, became popularised among the masses. Playing cards would also be fashioned from woodcuts. One can assume that their authors may have been craftsmen in the letter cutting trade who were not as proficient as their peers, or block makers for book prints, and would have made the woodcuts for the poorer classes. The development of folk woodcutting began in the latter half of the 18th and the dawn of the 19th centuries. Mostly devotional images made their way to smaller towns and villages, and made popular by the Pauline, Dominican, Carmelite, Franciscan, and other religious orders. Centres of woodcutting grew around well-known places of pilgrimage, such as Kraków, Częstochowa, Kalwaria Zebrzydowska, and Wilno, now Vilnius in present-day Lithuania. Antique folk woodcuts in Polish south-eastern territories also come from local pilgrimage centres, such as Jarosław, Tarnowiec, Kobylanka, Leżajsk, and Radecznica.

Copies of images venerated in holy sanctuaries – mostly Marian, showing the Passion, and effigies of patron saints, were widely used to protect home dwellers, their possessions, domestic animals, as well as their crops. They would also be stuck into the inside of dowry chest lids, above animal cribs, and placed in basic frames. Woodcuts would also have aesthetic functions, such as decorating coltrina cloths with floral ornamentations and geometrical patterns found in books or old cloth-bound book covers. It would be rare for prints to portray lay scenes and people, such as bandits, hussars, or bear tamers. Woodcutters’ portrayals of holy figures would also be used in chapels, feretories, or pictures. Woodcutters often drew their inspiration from copperplate prints, with their work also being used as paradigms by other folk artists. In the middle of the 19th century woodcuts started to disappear, forced aside by the ever-growing popularity of glass pictures and mass-produced reproductions made with other printing techniques.

At the turn of the 19th and 20th centuries the few remaining folk woodcuts started to awaken greater interest among collectors and folk art connoisseurs, with first steps being taken in academia, with works being published by J.S. Bystroń, M. Sokołowski, and K. Piwocki among others. Artists also became interested in the woodcuts. For W. Skoczylas – who rekindled contemporary Polish woodcutting – his pupils from the “Ryt” society (E. Bartłomiejczyk, W. Wąsowicz, T. Kulisiewicz), artists from the avant-garde Polish formism circle, even modern woodcutters as J. Panek – folk woodcuts became a source of new ideas and a new expression. Artists were fascinated by the different, arealistic way of looking at the world, and important roles started to be played by rhythm, symmetry, and ornamentation. In the 20th century there were also individual attempts inspired by external activity, to revive folk woodcutting. Woodcutting blocks were made, among others, in the interbellum period by Jędrzej Wowro from Gorzeń Dolny, and in the 1970s by Piotr Dymurski from Groble. They did not, however, mark the beginning of a revival in this style of art, unlike the resurgence of glass painting.