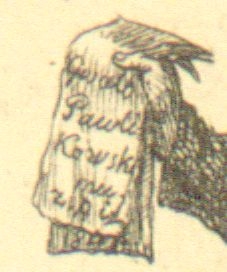 The handwritten dedication: „To H.L., Gw. Pawlikowski in Med” (To His Lordship Gwalbert Pawlikowski in Medyka) on the reverse of a print depicting the Guardian Angel (see database 69730) may serve as an example. It is certainly in Kielisiński’s hand writing. For several years he wandered through Poland not only collecting folk woodcuts, but also other „ancient local relics” which he described at length in his letters and later took his acquisitions to his client.

Intensive cooperation between Kielisiński and Pawlikowski and even a certain amount of intimacy between the collector and the artist, is clear not only from abundant correspondence between 1830s and 1840s, but also from a detail included by Kielisiński on one of his works. It is a copperplate showing a pedlar of paintings. This small engraving shows a man in a long coat and a tall cap standing on a road against rural houses, laden with merchandise for sale. He is depicted with finished paintings hanging on his chest, holding a roll of cloth or paper under his arm, and tools on his back. There is a dedication reading „to Gwalb. Pawlikowski” on the sheet in his right hand, and lower the date of 1841. On the edge of one of the paintings the author’s initials of K.W.K. appear on his chest, followed by the date and place were the copperplate was made: „10 Jul. in Kur[nik]*. Another copper engraving, made in 1837, shows the Medyka palace, the ancestral seat of the Pawlikowski family, the place where the collection was kept. This collection was gifted to Ossoliński National Institute in Lwów in 1921.

* A copperplate made at the end of Kielisiński’s life when he was living in Kórnik, (the spelling of Kurnik was formerly used) working as a librarian to Tytus Działyński.
Copperplates „Pedlar of paintings” and „Palace in Medyka” from the Jagiellonian Library collection.