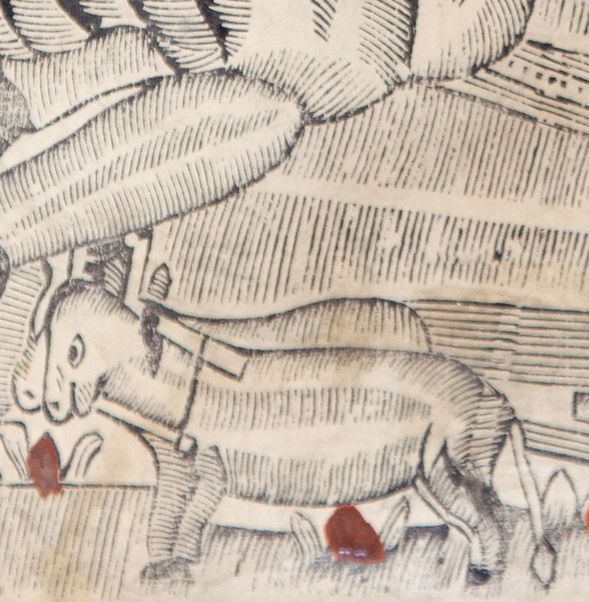 In poorer homesteads, it was not uncommon for domestic livestock to share the living space with the inhabitants under one roof. Cattle held the highest place in the home’s hierarchy, with special status awarded to the ox, the major driving force of the countryside at the beginning of the 20th century. Castrated and rid of his “sinful” ways, according to folk belief it was the ox which was predestined to contact all things sacred. It was the ox who worshipped the Baby Jesus in the manger, helps the Holy Family, warming the Infant Jesus with his breath.

It was believed that the ox could uncover that which was holy. Folk legends regale that only oxen could discern Jesus walking among men on earth, or Mary travelling with her child. It was also granted to the oxen that they plough up the figure of Our Lady of Gidle, a fact which was then celebrated by peasants falling to their knees when they saw Her. This scene is portrayed in an 18th century image from the sanctuary in Gidle, which then became the basis for other folk works. Artists often depicted the oxen as having human faces, humbly kneeling before the holy figure which has just been ploughed up from the ground. Other depictions show a sole angel ploughing the land, so that Saint Izydor Oracz could pray (cf. inv. E/5000/MT).

There was a belief that these animals, being morally spotless, stood at the defence of morality and honesty. In folk tales, the ox starts to cry dismally, hitting its head against the wall in order to dissuade the woman of the homestead from undertaking a dishonourable act, such as infidelity, while her husband is away. In other circumstances the ox refuses to cart away stolen grain, turning over the cart at every attempt by the thieves to steal the food. Oxen willingly helped humans, saving people in times of oppression, for example defending them from wolves, adders, from drowning. Being very attached to their owners, they often fell ill with them, and would even die in yearning for their master who had just passed away, or even after being sold to another farmer.

These passive and unhurried beasts became a synonym of hard work and patience. Today we still say “to work like an ox”, or “as patient as an ox”, a reflection of the positive character of the person it may describe.