STRONA GŁÓWNA / AWERS/REWERS / OUR LADY OF THE SEVEN SORROWS 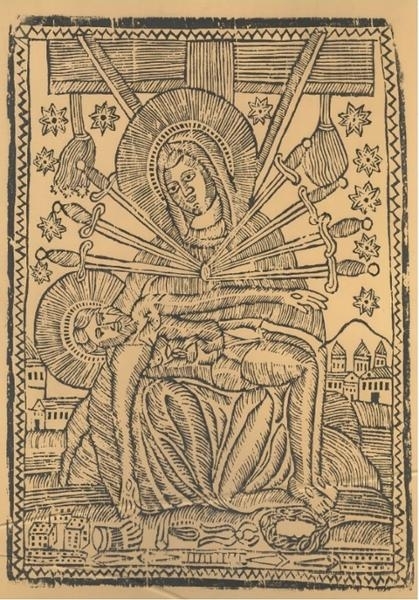 Beginning in the 16th century, pilgrimage sites, chapels, and brotherhoods dedicated to “The Suffering Mother of God” were founded. Examples are the Church of St. Martin in Bratislava, the Marian Hill in Nitra, Topolčany and Šaštín. The founding of the latter was connected to an event from 1564. In that year, the quick-tempered deputy palatine of Hungary, Imrich Czobor, planned to throw his own wife from a carriage. According to the legend, Andżelika Bakič (the wife) began to fervently pray to the Mother of God, asking for protection from her cruel husband. It was then that Mary appeared to her, and the suffering woman promised Mary to erect a statue of Our Lady of Sorrows in that spot if her husband changed his mind and repented. When that came to pass, the couple jointly funded the installation of the statue as a votive offering of thanksgiving.

The establishment of the Day of the Blessed Virgin Mary in 1727 by Pope Benedict XIII caused the cult of Our Lady of Sorrows to spread throughout Slovakia. New churches and chapels dedicated to Her were built, and the sanctuary in Šaštín grew rapidly. In time, this sanctuary would become the national Slovakian sanctuary. The statue of the Holy Mother in the sanctuary was proclaimed miraculous in 1732, and the construction of a new temple was undertaken. In 1762 it was dedicated to Her, in the presence of the Empress Maria Theresa. At that point, every year close to 80,000 pilgrims from Hungary, the Czech Republic, Moravia and Austria visited Šaštín. In the 19th century, Šaštín was the second-most visited pilgrim site in Austro-Hungary (Mariazell was the most visited).

It was in the 18th century that the image of Mary pierced by seven daggers gained the name “Our Lady of the Seven Sorrows”. Even today this term is widely used amongst Slovaks.

The cult of Our Lady of the Seven Sorrows was popularised by the activities of numerous sodalities and Marian guilds, which printed pamphlets, song books, and prayer books, as well as founded calvaries. The calvary in Barańska Szczawnica, created between 1744–1751, deserves our special attention as it includes a total of seven chapels dedicated to the Sorrows of Our Lady.

The image of Our Lady of Sorrows was a popular iconographic motif in Slovak folk art. Our Lady of Šaštín was copied most often and this image was known throughout Slovakia. Figures worshipped in Nitra, Topolčany and Holíč were also often copied. Wooden and stone sculptures, graphics and glass paintings were also modelled on Our Lady’s images popularised through devotional prints and religious literature of the time. In the 19th century, the Pieta was the most popular theme depicted by folk artists. Numerous small roadside shrines were built, while depictions of Our Lady of Sorrows as advocate, mediatress and helper in moments of hardship were commonly hung on the walls of homes.