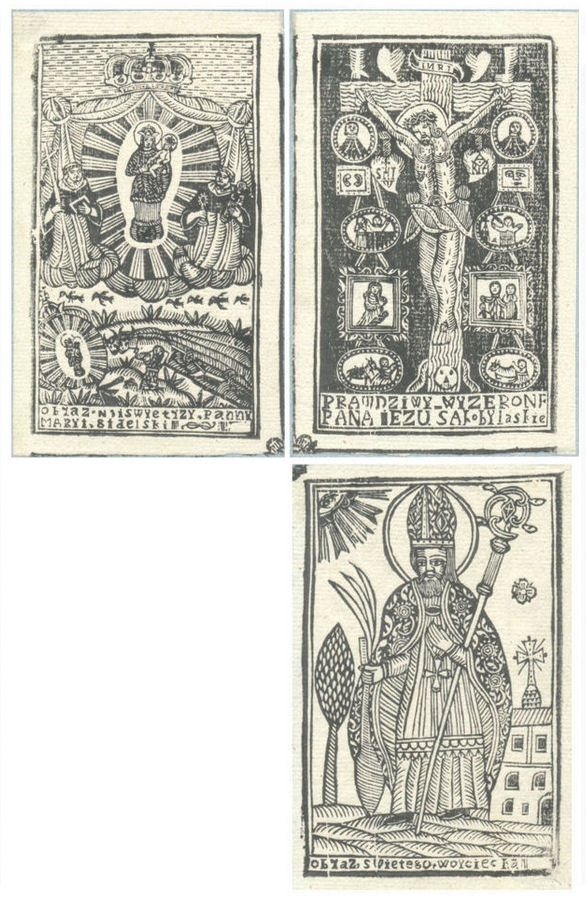 They are drafted in a fine, diversified line, with fields of vertical or diagonal hatching denoting chiaroscuro, drapery and areas of background land. They are similar in dimension (ca. 14.5 x 9 cm) and the lettering of the inscriptions on all three is clearly similar. The inscriptions themselves in each case betray the hand of a folk artist – they are difficult to read, contain errors, and are characterised by a mixture of minuscules and majuscules within each word.

The history of these woodcuts is fascinating. They come from the collection of Józef Gwalbert Pawlikowski (1793-1852). On the Pawlikowski family estate in Medyka, near Przemyśl, for many years he collected historic mementoes, books, archivalia and all kinds of artworks known at the time as “fatherland antiques” – material evidence of Polish history and of the nation’s achievements under the Russian, Austrian and Prussian partitions. Among this collection was a unique group of 143 folk woodcuts. Several of them had found their way there thanks to Kajetan Wincenty Kielisiński, a printmaker and ardent lover of the Polish lands, who travelled around them and bought up whatever curios and antiques he found for Pawlikowski’s collections. In 1921 the whole of Pawlikowski’s collection (including the woodcuts), was passed on to the Ossoliński National Institute in Lwów by his grandson. In the 1940s they were incorporated into the collections of the Library of the Academy of Sciences of the USSR, and they are now in the possession of the Wasyl Stefanyk Lviv National Scientific Library of Ukraine.

Pawlikowski’s collection of folk woodcuts played an important role in the early twentieth century, when visual artists seeking contemporary forms of expression became interested in folk art. The greatest aficionado of the folk woodcut genre was Władysław Skoczylas, for whom the rhythm, ornament and symmetry of this traditional print form became an important source of inspiration. They were also a major source of information in the first works on the history of the folk woodcut: used by Marian Sokołowski in his trailblazing article “Drzeworytnictwo u nas” (The woodcut art in our land, 1903), and given more attention by Ksawery Piwocki in his monograph Drzeworyt ludowy w Polsce (The folk woodcut in Poland, 1934).

Characteristic elements of the three woodcuts shown here are the vertical and horizontal lines along the edges of the paper. Another differentiating feature is the characteristic impression of the stylised flower in the corner. This suggests that all the impressions were made from the same block onto a single sheet of paper and then cut up for sale separately. The block almost certainly also featured a fourth image, which is unfortunately lacking from this set. It may have been an image of St Stanislaus, who is often depicted together with St Wojciech, as tradition calls them both patron saints of Poland.

Scholars of folk printmaking have often used the message conveyed by the theme of the image to determine the provenance of a woodcut. In this case, in which we have what was presumably a single woodcut block bearing a number of different themes, this method would not be suitable. The image of Our Lady is a reference to the miraculous figure of Our Lady in the sanctuary in Gidle near Częstochowa. The depiction of Christ on the cross is a folk reproduction of the painting in Kobylanka, in the southern Polish region of Małopolska. The cult of St Wojciech, in turn, was most strongly connected with Gniezno in Wielkopolska, but was universal in reach, and as such it would be difficult to link a print of this saint with one particular place. It would, however, be appropriate to suggest that this anonymous woodcut artist deliberately made a block from which prints would sell well in a number of popular destinations of pilgrimage.