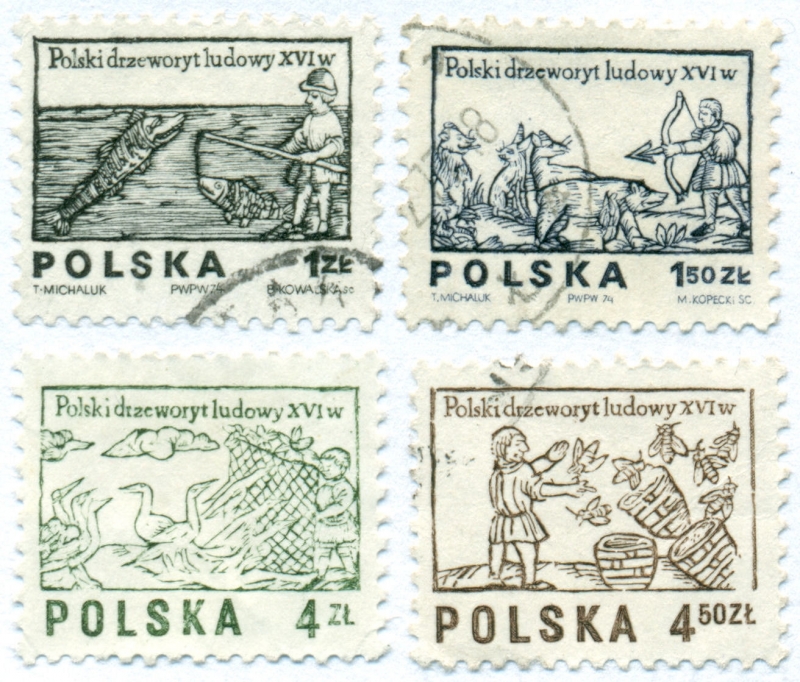 The stamps were made by the Polish Securities’ Printing Works based on a design by Tadeusz Michaluk. The first two were published in 1974; the stamp with a denomination of 1 złoty shows an angler (engraving by B.Kowalska) and the other of 1.50 złoty – an archer hunting for a bear (engraving by M.Kopecki). The next two stamps were published in 1977; one of them has a denomination of 4 złoty and shows a man catching birds in a net, the other with a value of 4.50 złoty shows a beekeeper, bees and hives (unsigned). The series was made as steel engravings, the first two stamps are 25.5 x 21.5 cm, the other two are slightly smaller, 25.5 x 20.5 cm.

When designing the series, Tadeusz Michaluk reached for the woodcuts by an artist whose name we do not know but who made numerous illustrations for the above mentioned book by Paprocki which has a long title to provide the reader with a detailed explanation of the content according to the custom of the times: Knights’ gathering in which various creatures hold conversation providing an example for men on how to live, what to learn and what to avoid. The work includes a verse parable featuring characters who are not only human but also include talking animals, trees, stars, mountains, etc. The content, which is in the form of tales, gives the readers a moral warning and indicates the way to wisdom.

Paprocki’ book was published several times and each edition contained more than one hundred woodcuts. The subsequent editions differed not only in the title page, but first and foremost in woodcuts printed using different blocks, copied by woodcut makers who wanted to remain close to the original. Interestingly, a number of illustrations from Paprocki’s works served in a variety of contexts: another Polish author, Jakub Kazimierz Haur, used them in his book entitled Collection or treasury of great secrets of landed gentry’s husbandry published in Krakow in 1689. The woodcut of the angling man wearing a peasant’s homespun coat in Paprocki’s book illustrated parable number 44, i.e. „A story of a pike and a tench” which is intended so that „We can always learn from someone else’s misfortune.” The poem is about a pike which warned the other fish not to eat the bait on the fishing rod, but the hungry tench did not listen and was caught. In Haur’s work a similar image illustrates Chapter 8 on „how to make dragnets, nets, and fishing sacks”, where the reader can also find out what marine fish appear in the Vistula and other rivers in the spring bringing „benefit for the fishermen and convenience for the cooks”.

The woodcuts contain a hint of compositional principles which were still applied in the Middle Ages and according to which the proportion of the depicted people, animals or objects is determined by their role. This led to the enlargement of people or objects which were to focus the attention as the most important. And so in the woodcut with the archer, the arrowhead in the bow pointed at the bear is disproportionately large; in the next woodcut with the beekeeper, unnaturally large bees are flying out of the hives. The woodcut showing a hunter catching wild geese illustrates another interesting point associated with the old hunting methods. This scene depicts catching animals into nets which were very long and stretched on sticks. Frightened birds were chased into them and caught alive to be bred.

Are the prints presented in traditional Polish literature really folk woodcuts as suggested by the title of the series of postage stamps using sixteenth-century source? It seems that when Tadeusz Michaluk was designing the series, he was based on the beliefs of Tadeusz Seweryn, a researcher of prints, who devoted much attention to the history and artistic origin of sixteenth and seventeenth-century book illustrations (see Staropolska Grafika Ludowa, Warsaw, 1956). Seweryn stressed the fact that at the dawn of native woodcut art, the folk woodcut trend was already present. He surmised that the authors of many engravings depicting genre, satirical or religious scenes were most likely guild apprentices who moved from towns to the country to make a living among a new group of buyers. In his opinion, in the sixteenth century there was a clear distinction into professional woodcut workshops which cooperated with printers and suburban bunglers who sold to less fastidious buyers. The latter copied book illustrations, made prints published in the popular minstrel literature, some also became pedlars, selling their prints directly on the markets and stalls during religious festivals. According to Seweryn, the plebeian Renaissance and later Baroque literature illustrated with woodcuts and popular among townspeople and in rural areas, marks the beginnings of folk woodcuts in Poland which developed as an autonomous art form most fully in the eighteenth century and disappeared around the mid-nineteenth century.