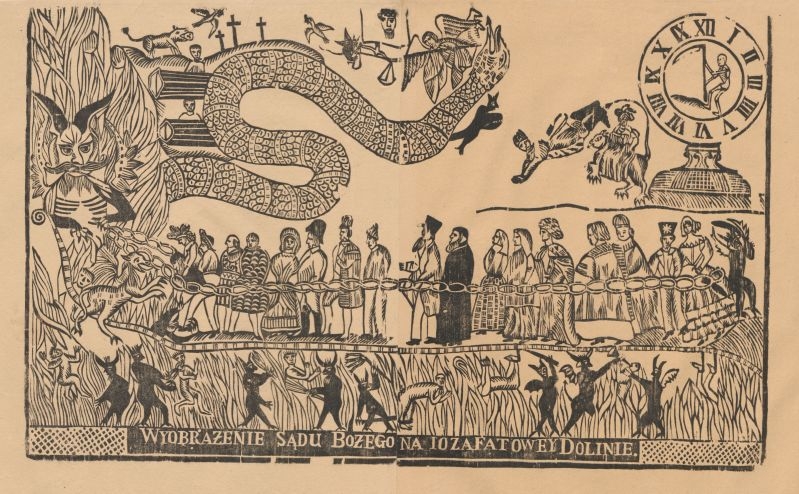 The prophet Daniel had a vision that the signs of the end of the world would be the rule of a beast on earth, oppression, and war. Nevertheless, he preached the hopeful news that the righteous would be liberated from their suffering and a time of order and peace would come. The best known apocalypse is the Revelation of St John, which describes the last events for the world we know and live in, which will undergo a turbulent transformation into a new Heaven and a new Earth. The most important information here for humanity is the promise of the inevitable Last Judgment, which will sort the righteous from the sinners. The good man will receive his reward, and will live as a redeemed being, but the evil man will be punished with damnation.

As time went on, these scriptural visions found expression in Christian art. Biblical signs and symbols, and the descriptions in the apocryphal writings intrigued artists, who often added their own interpretations. The earliest representation of the Last Judgment is found in catacomb art: Christ is depicted as the Good Shepherd, separating the sheep, symbolising good people, from the goats – a metaphor for sinners. In the first centuries of the Middle Ages representations of Divine Judgment became popular features on the western walls of churches, seen by congregations on their way out. These images are usually divided into two sections – the upper section the illuminated heavens with a host of ascending angels, and the lower a serpent symbolising Satan. Christ is positioned in the centre, on a throne, with Our Lady and St John the Baptist alongside him, interceding for mercy. The Archangel Michael is announcing the hour of judgment. Angels weigh human deeds, or hold spears labelled with the antitheses of the virtues, running them through sinners. Devils snatch the damned, mercilessly subjecting them to torture and casting them into the flames. These paintings focus on Christ as the severe and just judge who will come to earth again to impose a new order. The image of judgment is designed to remind us of our fate. We do not know the day or the hour, but come it will. Extremely detailed, realistic images of half-naked, suffering people undergoing judgment, the righteous being protected by angels and the sinners tormented by devils, were created by Renaissance artists. Paintings of this type are found on church altars in the West, intended for contemplation during the Eucharist, which was understood as the judgment and coming of Christ.

According to tradition, the Last Judgment will take place in the Valley of Josaphat, though the exact location meant by this designation is unclear. Some point to the Kidron valley near Jerusalem, others to the site where a battle was fought and victory celebrated by King Josaphat of Judea and his people in the 9th century BC.

Since the world had a beginning, it seems logical that it will also have an end. When will that come? Some say it will be soon – on 21 December 2012, though it is unclear whether the venue will be the biblical valley of Josaphat, since these revelations are based on the Mayan calendar.

Our database includes a woodcut depicting a folk representation of the Last Judgment; see I.11064 BJ