STRONA GŁÓWNA / AWERS/REWERS / FROM COMMON DITCHES TO EUROPEAN SALONS. THE CAREER OF THE DEVIL BORUTA 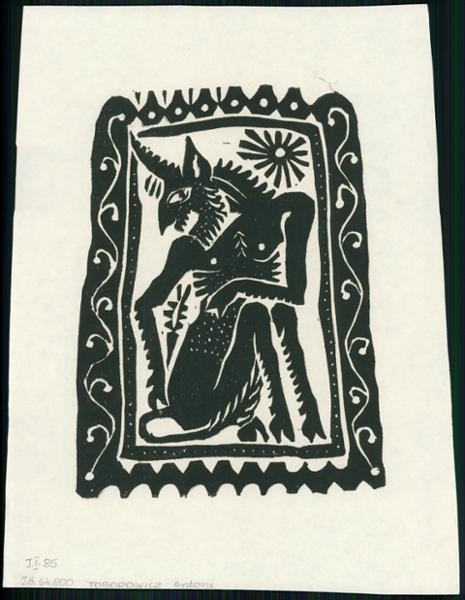 He was promoted after the region was Christianised, gaining a position as a folk-devil. His job description did not change significantly, however – he was still startling horses, frightening and leading travellers astray in the marshes, but favourable conditions in his sector allowed him to invest in his image. In the end, he monopolised the local market in Łęczyca. The events he organised were innovative, spectacular, simply out of this world. He appeared as a black dog, a goat, a monk, a wild duck or an owl. Sometimes, as everyone does, he caved to fashion and appeared as a foreign stranger. Evening party-goers, full of unforgettable anecdotes about his antics, guaranteed him free and effective advertising. Boruta set about his tasks with dedication and passion. He liked his work, and when he achieved success, “his whole face shook with laughter and he clapped his paws together happily”. He also noted his failures. He was not able to destroy the collegiate church in Tuma – he only scratched at it with his claws – but this defeat was justified by the fact that he attempted it in the 12th century, when he was still inexperienced in devils’ work.

The years passed, and Boruta grew stronger in Łęczyca, but began to feel a bit cramped. By now the people were civilised, which meant that Boruta’s professional development stagnated. The devil did not want to move. In Łęczyca he felt at home, he was a son of these lands and he loved the bogs here. He had furnished a flat in a fancy spot called the Hollow Willow with a view of the woods and had not even thought about moving and starting all over again. There were signs that he would have to do so if he wanted to be a player in the business. Help arrived for Boruta from an unexpected source. It was men of letters who rescued him from the rut into which he had fallen. Thanks to them, “he finally attained a noble title which assured that, as a newly anointed aristocrat, he was transferred from country ditches and forest swamps to the more comfortable and richly furnished barrels in the dungeon of the Łęczyca castle, so that he could more easily take part in the feasts and festivals of his noble brothers”. He excelled in his new residence. “In the dark Łęczyca dungeon, near the smoldering torch of pitch, a whiskered noble would sit on a barrel and drink from the keg. He wore a crimson żupan, gold belt, and a sabre on a leather strap; his peaked cap with gray sheepskin was not, however, a perfect fit, as something seemed to be hiding underneath – any time he wanted to scratch his head, five huge claws appeared, while the act of doffing a hat would expose his small black horns. […] His face was large and ruddy; a luxuriant moustache and beard covered his chest. He was of great height, broad-shouldered, with flashing eyes”. The treasures hidden in the castle’s dungeons would tempt adventurers, but none were able to find them. Instead of gold coins and precious stones, they would leave the dark cellars with the seed of eternal condemnation planted in their souls. In the meantime, Boruta was doing great – as a nobleman, he used the Jastrzębiec coat of arms, while as a devil, he was highly valued by the management. After a hundred years, Boruta got bored of his castle cellars and attempted to get more engaged in his life as a nobleman. Yet the Łęczyca gentry turned out to be less naive and more pious than he expected. In the end, a swordsman cut off two of Boruta’s fingers in a duel, and he realized such overt activities would lead to failure.

Boruta spent the wars of the 20th century in hiding. As more powerful evil forces than himself reigned in the world at the time, Boruta decided that it was better to stay in the dungeons. Around 1957, he acquired the position of a working devil in the local ore mine. Although he learnt quite a lot about mining and miners, he did not do particularly well. The political climate of the time was in his favour, but overall very few people wanted to loyally and continuously collaborate with him. Years passed. Boruta was forgotten. Books with legends and stories describing his mischief lay on library shelves, covered with dust. Adults relegated stories of devils to children’s bedrooms, but even children were discovering more attractive heros in the world of computer games and plastic toys. Boruta was lucky, however. Hundreds of years on the market, as well as his extensive experience, finally bore fruit – Boruta returned with the Regional Operational Program of the Łódź Voivodeship in 2007–2013. During the course of the project, entitled “The Nobleman Boruta as Łęczyca and the Łódź Voivodeship’s Trademark”, the devil lost his horns, hooves, and tail. In this administrative world, he stopped being an evil force and became a brand, symbol, and a gadget. I suppose that Boruta is laughing out loud and rubbing his hands in delight. Perhaps we will soon hear that Boruta has attained a high position in Brussels.