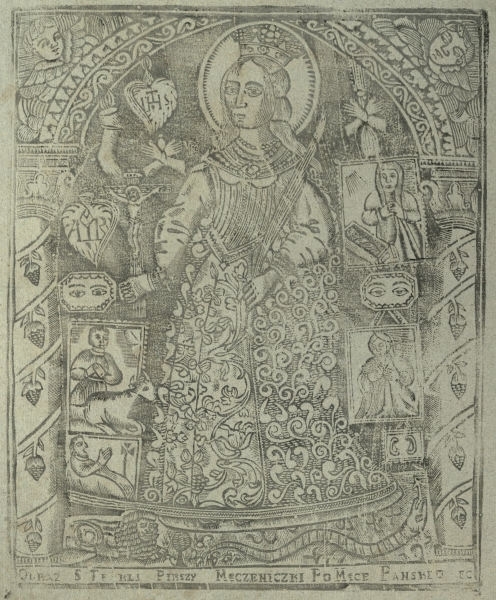 Her name consists of two Greek words: theos – meaning God and kleos – fame, glory. Popular at one time, it now appears in historical context and is associated with the old. And yet once it was not so as is shown by places of worship of St. Thecla in Poland, by works of art and literature. Although the writings about her life may include apocryphal works and most of the information is considered to be fictitious, Thecla is regarded by many scholars as a historical figure living in the first century A.D. In the literature we find the information that she came from a wealthy home in Iconium in Asia Minor. A sermon preached by St. Paul of Tarsus persuaded her to convert to Christianity. She subsequently became an evangeliser which was not typical for women at the time. Her desire to become a disciple of the saint aroused anxiety. Paul was put on trial and consequently sentenced to whipping and banishment. Thecla, who bribed the guards at the prison to listen to the teachings of the saint, was sentenced to be burnt at the stake. However, she was released because the burning stake was miraculously extinguished by a downpour. The fact that she emerged from the fire unscathed like the phoenix was emphasised by the hagiographers. In a guise, she could then follow Paul to Antioch. There she rejected a pagan who was courting her and who subsequently complained to the proconsul who decided to feed Thecla to wild animals. She spent two days among the lions but was defended by a lioness. The author of one of the texts describes how she escaped unscathed from a pond full of seals: at that time these animals were little known and considered dangerous. As late as in the eighteenth century Benedykt Chmielowski, author of „The New Athens” wrote: a fish the size of a calf or a dog with a tough hide covered with fur and large teeth resembling an iron blade which are a gift from nature. Over time, seals in the literature were replaced by venomous reptiles and amphibians that did no harm to the pious Thecla. Miraculous deliverance came even when the torturers tied her to the horns of wild bulls. The martyr bore witness to her faith confessing that she was a handmaiden of the living God who gave her strength. She travelled to St. Paul to Mira, then to other places where she spread the word of God. She died in Seleucia at a venerable age and her relics were taken to Catalonia in the fourteenth century.

Semi-fantastic stories were to comfort the faithful presenting the martyrdom of Thecla called „the jewel in the Lord’s crown”. Thecla’s worship may be traced back to the fourth century. Her feast is celebrated on 23rd September in the Western church, and on 24th September according to the Julian calendar in the Orthodox Church. Thecla is the patron saint of the dying, of those suffering from eye diseases and of brotherhoods bearing her name. She helps in all kinds of needs and sufferings, even in debt. She protects against snakes and wild animals, fires and epidemics. She enjoyed great cult in the Polish countryside where there are numerous shrines containing her sculptures. To date the WMDL database features just one print showing St. Thecla surrounded by votive offerings in the splendour of rich robes, with a cross and the palm of martyrdom in her hand, and attributes in the form of a lion and a serpent (see ECT.3127). Her cult was promoted by brotherhoods, the Trinitarians, Bernardines, Augustinians and Jesuits, and in prayers such as litany, hours, novena and various songs. The cult of the saint flourished in Poland, especially in the seventeenth and eighteenth centuries, most paintings and shrines of which she is the patron saint date back from this period. The most popular are sanctuaries in Koło and Dobrzyca in Wielkopolska region.