STRONA GŁÓWNA / AWERS/REWERS / THE CHARMING VOICE OF THE DECEIVER 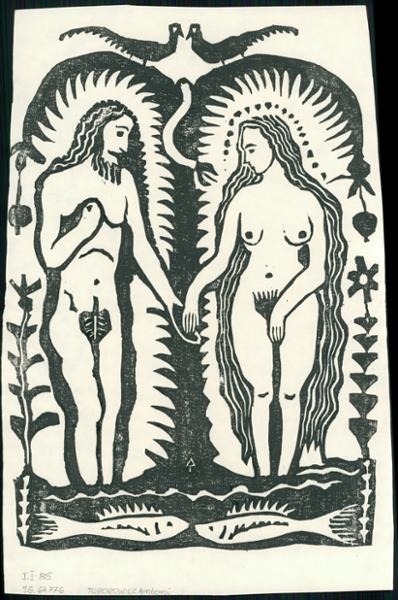 The serpent in the woodcut is really a little snake, because it has none of the majesty of the great constrictors – it is thin, although its length is unknown as we see only one segment of its elastic body. The head of the snake is in full view, its open maw with its dagger-like tongue turned toward the woman, extending beyond the border of the mandorla radiating from Eve’s figure. Eve looks at the snake without fear, because she does not know fear; in the garden where she lives with Adam, there are no venomous snakes or tongues. The Lord God comes to visit, it is beautiful and warm, work requires no effort, dreams are peaceful, there is no pain, the water is clean, and lions eat tender, nourishing greens. Eve looks at the snake with interest, because the snake is speaking to her, whereas the other animals are mute. The snake is unique, so it deserves attention and special treatment. I would hope, that despite everything, it did not manage to trick Eve so easily, in the course of one short conversation; it had to try, to exert some effort in order to deceive her. It had to run tests and observe the results. Perhaps it appealed to her with some other attractions – it attached neon lights to its scales, music to its tail, and gave off scents pleasant to the nose. And of course it must have trained its voice earlier so that it would be warm, rather low, and calm, but also dynamic, full of emotion and deeply thoughtful. The snake had to train his voice so it would travel directly into a listener’s heart, it would incite trust and seduce. The snake mastered and rehearsed rhetorical tricks beforehand. It also had prepared a list of deceptive words.

Adam stands at Eve’s side. He is close, he holds her hand and looks at what is unfolding in front of his eyes. Why doesn’t he take part in the conversation? If he hears it, and he must hear it, why is he silent? Perhaps, for the snake, the encounter depicted in the woodcut serves only as an occasion to test the waters and make a good impression on the “first naive woman”? Perhaps, while the snake was tempting Eve with his false promises, Adam was tinkering in his workshop, spaded his garden to make room for cucumber seedlings, as he liked eating pickles? Or perhaps he was trying to throw a felt ball made from cowhide between two junipers from a distance of eleven metres?

And then it happened. Although the image does not depict it, we know that Adam and Eve ate the fruit and broke God’s prohibition. They did so because they were masterfully lured into webs of conceit and corrupted by false words. First Eve, then Adam. We also know what happened later – a moving Advent prayer for the Redeemer and a joyous atmosphere before His coming on Christmas Eve remind us of this.

“From a beautiful Edenic place, a woman is banished in disgrace.
For a treacherous apple bite, offered by the snake out of spite.
Eve, leave the Paradise behind, everyone here knows your kind.
Go away, Adam, go away! Such delightful place is not for you to stay”.

This is how one of the forgotten Christmas carols starts. It describes the consequences of the first fall of man – about the dramatic banishment from Paradise and the birth of Jesus. Without any doubt, the carol is worth recalling before the first star shines on Christmas Eve, before the word is made flesh, and before we admire fire freezing or splendour darkening, or before we are moved by the modesty of the nativity scene. Prior to angels singing the glory of a newborn Saviour, it is worth reminding oneself about the existence of that deceptive voice that leads to destruction.

Reflections on Adam and Eve, the snake-tempter and sins was an inspiration for the woodcut by Antoni Toborowicz. See BN G.64776