STRONA GŁÓWNA / AWERS/REWERS / ANTIMINS – INSTEAD OF A TABLE 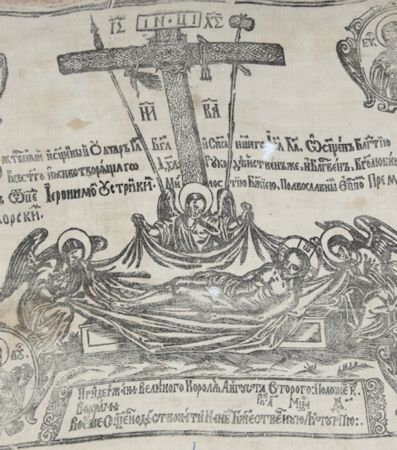 We find out the answer when we realise the purpose and importance of the antimins and its use in the Churches of the Eastern Rite. Its name, from the Greek antimension, means “instead of a table” which may be understood that it refers to an altar, which in essence replaces a table. The antimins, consecrated by a bishop and ceremoniously handed over to the parish, is placed past the iconostases on the so-called prestola (Throne of God), where other items used in the liturgy are kept. The Gospels rest on the antimins, which is distinguished by containing a relic which is sewn into it, usually a piece of cloth from the attire of a saint. The miniature pocket sewn onto the reverse of the cloth serves this purpose.

The exhibit is part of the MEK collection (cf. 75831 MEK for detailed description), and is only a print by an unknown artist, probably made in the years 1715-1733, and did not perform its designated function as an antimins in a church. There are no dates of consecration or the parish to which it would have been donated, and the pocket for the relic remains empty.