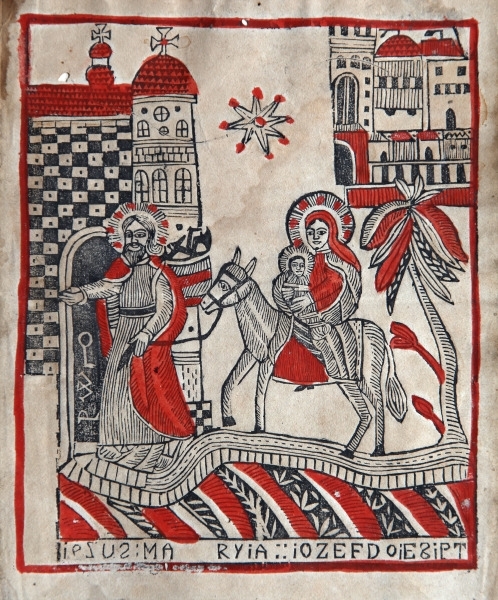 We do not know much about the flight of the Holy Family to Egypt. It began in the night. Saint Joseph, warned in a dream, arose, packed what was necessary (including his carpentry tools), and before the first rooster crowed he, his wife, and the child all left the house. The threat which forced them to flee was real, and close: the mad King Herod, having not received news about Jesus from the Three Wise Men, decided on a radical solution to his problem with who would succeed him to the throne; he simply ordered the murder of all young boys in the region. Because of this, one of the many royal descendants also lost his life, but as everyone knows, there are more important things than the life of your child.

In these circumstances, the Holy Family was forced to abandon Bethlehem with great haste. They could not hide and wait out the danger, they could not count on mercy or help. Herod’s spies were professionals, and evil-doers and traitors, who are always ready to commit sin for profit, are ever-present. The family therefore arose and went into exile that very night; they fled to Egypt, only returning to Israel after Herod’s death. The Evangelist Matthew writes about this in his Gospel (Matthew 2, 13-25). What happened during their exile, which, according to calculations, lasted over three years, is discussed in apocrypha, visions, and legends. As such, fantastic springs, trees, rocks, caves and temples mark the route of their escape, which contemporary Egyptian Christian pilgrims still travel today.

St. Joseph and Mary, along with the little Jesus, walked, travelled and sailed over two thousand kilometres. Their journey was long, exhausting, and dangerous. They were in danger of robbers lurking in wait for travellers, wild animals, the heat and cold, and hunger and thirst. They had to cope with all of these somehow. St. Joseph, a man, husband and father, was also a skilled carpenter who carried his tools on his back for a reason; Mary was a talented weaver. Parts of their journey were made possible by the gifts from the Magi, but the Holy Family was able to survive the hardships of their exile thanks to, above all, the compassion of people whom they met along the way.

Early Christian legends describe how nature was also involved in the Son of God’s escape, and what the consequences of this were. Some of these stories were assimilated into our culture, so instead of an exotic palm, there would appear familiar types of plants. A fern, for example, offered its roots to the hungry Child, and consequently its bitter taste vanished and has been absent ever since. An aspen tree, which in fear of Herod’s guards’ axes refused to shelter Mary, trembles to this day, even during windless weather. A hazel tree, which hid the refugees out of its own initiative “was blessed with dense brush in reward; now lightning never strikes it and a man can find safety under its branches during a storm”.